I'm sick and tired of the perpetual mantra, "...the extremists in the settler movement who justify political murder." And when it comes out of the mouth of Nissan Slomiansky, an NRP Knesset Member, I'm less inclined to vote for any party list he's on.

Naively, I was hoping that this Jerusalem Post article, A lonely kippa backstage: Rabin Rally is too divisive, would be more balanced. Instead it was worse. 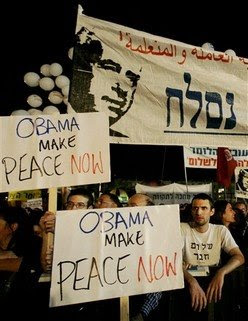 At least the article "admitted" that it was a "celebration," rather than a sad memorial.

"During the celebration, a former Meretz MK approached him..."

The theme, as usual, is blame the settler, and make "peace" by giving the Arabs Judea and Samaria. This time, they (look at the signs) demanded that US President-Elect Obama use his influence to push an agreement through.
And just to remind you, that (even if you ignore all the questions re: the official account) Rabin was killed by a young man raised in Herzliya, an upperclass Tel Aviv suburb. And one should never forget that Rabin was the officer in charge of attacking/murdering innocent Jews on the Altalena. Let the Left do their "cheshbon nefesh," accounting of the soul, first. They must first attone not only for the Altalena attack, but also the sezon and other immoral acts over the decades against Jews who don't agree with their ideology.
Posted by Batya at November 09, 2008

Shalom!
Yes, the article was lousy, to put it mildly, and Nissan Slomiansky is embarrassingly and dangerously obsequious, but most of the comments were good.
I can't remember the exact quote, which I think is from a rebbe in the mussar (ethics) movement, but this is the gist of it, "Truth (tzedek) has a hard time arguing because all it has to back it up is truth. Lies use all kinds of tricks to fool people. But in the end, truth will always succeed because tricks always fail in the end."
I suppose it'll be a while...
Hadassa

But we need to work and not wait.

Herzlia Pituach is an affluent suburb. Old Herzlia ia working-class with a lot of Yemenites such as the Amir family.

Thanks for the clarification, but it's still no YESHA yishuv.

Shavua Tov!
I'm sorry if I implied that we should merely wait and not work. That wasn't my intent. My neighbors drove me crazy with their incessant orange ribbons and naive belief that "it wouldn't happen." Like it didn't happen in Yamit? Fool me once, shame on you. Fool me twice, shame on me.
Hadassa

Yamit had fewer supporters.
I remember that the new yishuvim post-Yamit were supposed to be internationally garranteed, and many were replacements for the destroyed ones. And of course the big question, how did Kfar Darom get on the list?