What a strange verb to describe one of the most frightening and dangerous wars in the History of The State of Israel.

It was early Yom Kippur afternoon, and my husband was about to leave for Mincha (the afternoon prayer.) Suddenly we heard a siren. The stairwell was filled with neighbors rushing into the shelter. I was sent up to try to explain to an elderly woman, Bubby Willig, an English speaker, that she ought to join us, but I was told not to panic her.

We soon discovered that Israel had been attacked on two fronts, in the north by Syria and the south by Egypt. Our troops/soldiers (troops don't give it a personal enough sound) had been overrun, killed, captured. Israel was in mortal danger.

Miraculously, within a couple of weeks, we were victorious. It would have been easier if the government hadn't kept consulting wiht the Americans, who weren't really allies. For them it was a game trying to control all the fighting forces/armies. We did much better in the 1967 Six Days War on our own.

In the very early days of the war, our New York Betar friend, Chaim (Chuck Hornstien) Haran was killed. Almost two months later, yes after the ceasfire, Eli Solomon was killed by an Egyptian sniper. For many of us in the New York Betar crowd that made it that 100% of our friends who had fought were dead.

Since then, we gather at Har Herzl Military Cemetery every year. Now it's thirty-five years, and Baruch Hashem, bli eyin haraa, we were entertained by the antics of Eli's grandchildren. Afterwards we went to a friends' Jerusalem apartment where we toasted to:
"Friendship" 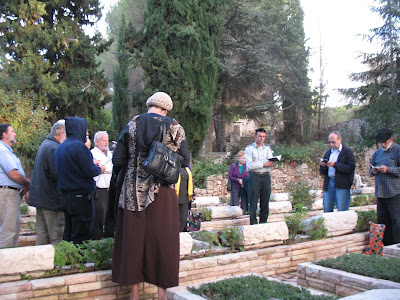 I was also in Israel when the Yom Kippur war broke out. I was staying at
the Maon Studentim shel Betar in the old city. The public phone rang in the
hallway right outside my room and when I picked up, my friend from the dorm
said, "Benjy, we're in 'emergency time'. Don't go outside" He then
explained briefly that Israel had been attacked.
I couldn't join the fighting so I went and volunteered in the post office
sorting mail to "Chootz La-aretz". I did that until the war was over.

Chuck Hornstein was my roommate at that time. What a sweet, cool guy!!
I received a postcard from him just 3 days before I learned he'd been
killed. He was telling me he was OK. He signed it "Peace, Chuck". I
immediately went to send a telegram to his mom and brother, but the good
news was extremely short-lived. What a nightmare!! I lost three friends
in that war: Chuck and Eli of course, and guy named Meir, another resident
at the Maon Studentim.

They are all sorely missed, honored and loved.

Another person staying at the Maon at that time was Nachman Eckstein. We
were both very effected by the loss of so many friends and "brothers and
sisters".

Benjy, thanks for adding your story. We had lived in Maon Betar our first year in Israel. The person who organized the renovations was David Federman, Noam's father.