I still wear my orange bracelet, which shows me as someone who considers Disengagement a great tragedy. Orange became the protest color against Disengagement.

Orange became the euphemism for the leadership of the Gush Katif communities. 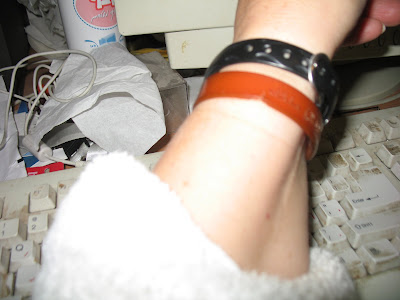 My orange bracelet is no longer bright orange. And it's starting to split. And I have no doubt that some day soon, in another few days, weeks, or maybe even months, I'll suddenly notice that it's gone.

Now, will I try to replace it? Should I already be looking to buy a new one?

No, I won't. It's not that I've changed my mind about Disengagement. It's simply because my suspicions about the "orange leadership" are getting stronger. I haven't trusted the "political judgement" of Moetzet YESHA for years, actually ever since they began their "camp out" protests during the anti-Oslo times. I even wrote an article in Hebrew opposing it, insisting that they were making a game out of our possibly being homeless, making it look too easy to leave our homes. I refused to even visit those protests.

Then during the anti-Disengagement protests, I was firmly against the slogan "Ten l'Am L'hachlit," "Let the People Decide," which demanded a referendum, rather than protesting the principle of destroying Jewish communities and giving our Land to our enemies.

It seems more and more true that the orange leadership and Moetzet YESHA have/had been working together. That's hard for me to accept. And it's even harder for me to show any sign that I may support that very same leadership.

When this bracelet falls off, it won't be replaced by another. It symbolizes their mistakes. I will have to find another way of expressing my feelings.
Posted by Batya at November 24, 2008

In America, Jews can still live wherever they want.

That's good, but I understand it's sometimes problematic to put up a mezzuza.
And why don't liberal, civil rights people protest that here in the HolyLand Jews are restricted?

American Jews are living in a temporary illusion. History shows that Jews have never been able to settle permanently.

Anyway,
when you talk about the orange leadership, please differentiate between the 'orange' political parties and the real orange grassroots organizations who have remained true orange God fearing non-pragmatic Land of Israel lovers.

How did Israel become such a naive easily snookered people ?
Even Caroline seems to be holding her breath for Israel's long running false hope George.

http://www.carolineglick.com/e/
-----------------------------------
Six weeks to do what he refused to do in eight years ?
He's had almost 8 years to pardon Jonathan Pollard.
FACE IT, If he were truly a friend of Israel, Pollard would have been freed long ago.
Even after all the Palestinian terrorism and non compliance ,they were always rewarded by Israel's strange hope for peace.
The weapons he supplied are now in Hamas hands aimed at Israel.
Either you have great hope in a fool or in a crafty devil.
His supplying of weapons to Lebanon are proof that his agenda is against Israel period.
Why are his religiously loyal groupies in such deep denial ?
Your hope in a wolf in sheeps skin is not admirable.
You forgot to mention that it was President Bush's personal interference and pressure on Israel which led to Hamastan,Gaza.
Whenever Bush or Rice meet with Israeli leaders ,Israel suffers.
Thats a fact which the Kool-Aid drinkers will never face because lies are their refuge.
Iraq is a success only if you leave out Iran's Shiite asendance and spreading influence without the restraint it once had under Saddam.
Under President Bush Iran has EASILY built a formidable army in Lebanon and Gaza.
Bush has worn out the military and bankrupt the treasury and so Iran is off the table.
Israel's misplaced faith in America and in a tall Texas liar who found his calling as a sinister politician has brought the nation to it's greatest unfolding disaster and not peace.
You swallowed his Road Map trap hook, line and sinker and still you refuse to remove yourselves from his hooks.
What will Olmert bring back to Israel from his visit with George ?
More removal of Jews from their homes and land is my guess.
Carla Fay Tucker got no mercy from the wolf in sheeps skin.

Josh, the problem is that the "grassroot" groups still respect the official leadership. They didn't decide to move en masse to Judea and Samaria.

marcel, I think it's an old problem, predating the state. A few years ago I watched Exodus and found it depressing. You could predict today's situation from it.

the grassroots is women in gren, honenu, homesh thila, kommemiut, virashtem, hasdei meir, and more. They are already here. Matot arim is also doing good work from outside.