Many people have asked me how my daughter could be a lawyer for Israel's Movement for Quality in Government:

"Aren't they all Leftist?"

(IsraelNN.com) The Movement for Quality Government has filed a motion to the High Court in an attempt to bar convicted terrorist Tagrid Saadi from running for public office. The movement is demanding that the Elections Committee of Sakhnin and the Interior Ministry's Elections Supervisory Commission explain why they are allowing Saadi to run for the Sakhnin city council.

Last night, I had unsuccessfully searched through the Jerusalem Post's Internet site for the article I had seen on Shabbat about the terrorist Tagrid Saadi running for her city council. B"H, this morning I saw this article. I just wonder why it wasn't caught earlier.

If I remember correctly, three years ago, during the previous Knesset Elections, Moshe Feiglin was prevented from running for Knesset because his restriction time was almost up. I don't even know if he was jailed, and he certainly was never a terrorist. He was just a political activist who had organized some road blockage, the same as the Histadrut and other organizations do frequently and are never punished. And Arye Deri, the brains behind the growth of the Shas Party has been politically restricted, again, not because of terrorism. There were some corruption charges against him, small potatoes compared to Olmert. More like Tzachi Hanegbi, who's still in power.

Different laws for different people. That's the Israeli way, with a Supreme Court which considers itself as ancient judges to activate their own personal agendas.

A few years ago, I took my parents to watch my daughter take her place as a lawyer in the Supreme Court, demanding that Ariel Sharon be charged with corruption. His lawyer said that he had "secret reasons" for what he did, and the judges accepted it. What a farce.

The Movement for Quality in Government also led demonstrations against the Olmert Government after that disastrous war. We all must work together in our common causes. 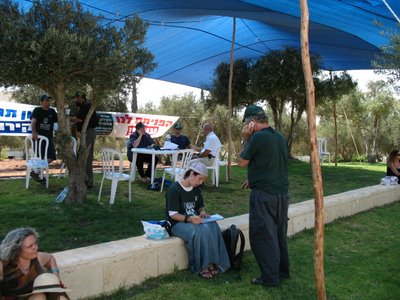 Email ThisBlogThis!Share to TwitterShare to FacebookShare to Pinterest
Labels: Movement for Quality in Government