Some Israeli officials have been pretty nasty claiming that they could have done a better job rescuing the hostages in Mombai. 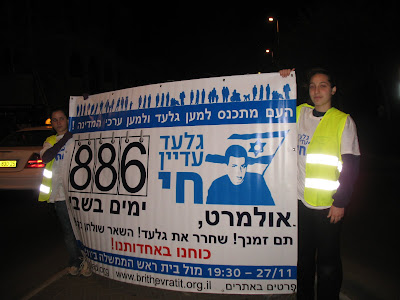 This picture was taken last Thursday night in Jerusalem, on the corner of King David and Mamilla Streets. If you don't understand the meaning, even from the very good graphics. It reminds us that 886 days have/had passed since Gilad Shalit was captured.

If Israel was really as skilled at rescuing captive hostages, or if Israel was better at negotiations, Gilad Shalit would have been home a long time ago.
Posted by Batya at November 30, 2008

The typical Israeli arrogance. No one, ask anyone, no one denies that Israeli commandoes would have done it differently and better. But who in the media has said even one little thing about that poor boy, who has no psychological training to deal with captivity, is still unrescued after two years.