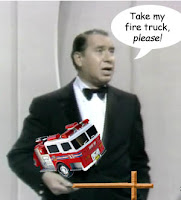 In the aftermath of the Carmel fire, there has been an expected outpouring of support from Christian evangelical and messianic groups. In an upcoming series of reports, Jewish Israel will expose the sincere, the deceptive, and the opportunistic among those who are partnering with major Jewish charitable institutions.

But first, we begin by covering an outrageous post-fire media stunt performed by the Jerusalem Post that demands exposure and investigation...

By promoting the flawed story as a news-breaking "exclusive" - based largely on alleged claims by Yechiel Eckstein - the Jerusalem Post consequently fanned the flames of scandal, expedited calls for Yishai's resignation, gave a boost to Israel's dependency on evangelical philanthropy, and used the upheaval over the Carmel fire as a maneuver against Orthodox groups that do not solicit or accept funds from missionary affiliated organizations.

Thanks for posting this! Eckstein is very expert at manipulating the media.

The Jpost can be pretty manipulating on their own. Look at what they did to the letter to the editor that Jewish Israel has in Jpost today.

a) they changed the headline that we complained about in our orginal letter from "Yishai refused fire truck donations from Christian group" to “Yishai’s refusal to accept gifts from Christian groups blocked donation of badly needed fire trucks” AND
b) they left out Isi Leibler's quote from the article which says, Eli Yishai "rejected an offer of fire-fighting equipment".

A little disingenuous. But it's the headline we compalined about which is now spread all over the internet.

You can see both copies of our letter to the editor here and a screenshot of the headlines here:
http://jewishisrael.ning.com/page/jpost-fire-truck-scandal

During the fire I heard an interview in which the reporter argued with the fire captain insisting that Yishai hadn't done his job well. And the fireman kept countering that he had been the best minister and the most supportive ever. Unfortunately the media controls the media. That's why I blog and invited you to blog here.

Shalom!
Someone, I forget who, in Hebrew language B'Sheva wrote an entire article dissecting how the media ignored Yishai's pleas for more funding for the fire department. Fire trucks aren't a hot media issue, until Shas can be smeared. Believe me, I'm no Shas supporter, but this latest media smear was disgusting.

(funny no mention or links to their previous story on Yishai)

Hi Keli,
It would be nice if the JPost actually took note of our protest, but I don't think the staff at JI can take credit for this headline.
Thanks anyway.