Israel's current drought and susceptibility to devastating fire bring to mind the joke about the dead person who is given a choice between Heaven and Hell.


Heaven or Hell
One day, Bill Gates dies. At the Pearly Gates, he walks up to St. Peter and St. Peter says, “Well, you’ve done so much in your life- time, I’m going to let you choose between Heaven and Hell.” Bill says, “Well, can I see them first?” St. Peter says, “Sure! I will first show you Hell.” They arrive at Hell and it is a beautiful meadow with flowers and deer and other animals blissfully running around. “Now to Heaven!”, says St. Peter. As they stand in Heaven, it is merely a bright light. Bill Gates says, “Well, if that’s your version of Heaven and Hell, then I choose Hell.” Instantly, Bill Gates is chained to a red hot piece of brimstone. Bill says to St. Peter, “This isn’t the version of Hell you showed me!” St. Peter replies, “That was just a demo.”

There are too many Israelis who, during the winter, are happy when it isn't raining, considering the rain an annoyance that interferes with daily pleasures.  That's very short-sighted and foolish, because we need the rain not only for those very pleasures but for our minimal existence.  This winter has been so dry you can almost count the raindrops.  It's not enough to just pray for rain; the Israeli Government must change its basic policies.

Yesterday dozens of people have died as the result of a massive fire in the north, the Carmel.  Thousands and thousands of people have been evacuated from their homes.  And of course there have been injuries and property damage and destruction.

We're being punished. Yes, all of us, because the Jewish People and Jewish Holy Land are all connected.  Remember that we pray in the plural, because we don't stand alone.  We're dependent on each other. The time of just Noach and family being saved is no more.  That's the message of the rainbow.

All of the Land of Israel must be settled, inhabited by Jews, not just the coastal plain.  Judea and Samaria are our historic Biblical heartland.  YESHA is not some useless, unnecessary, valueless trinket to be offered to pacify the enemy Arabs.  Nothing will pacify our enemies except defeating them and making it clear that they have no chance of weakening us, taking our Land.  Every "gesture," every "peace" agreement has only strengthened our enemies, whetting their appetite for terrorism, war and our, G-d forbid, our destruction.

This "hot as hell" weather is G-d's way of punishing us.  G-d has changed gears and is allowing a fire to rage and destroy to remind us that G-d's destruction is more powerful than man's.  Binyamin Netanyahu and Ehud Barak's government destroys Jewish homes and synagogues.  G-d has responded with greater destruction. 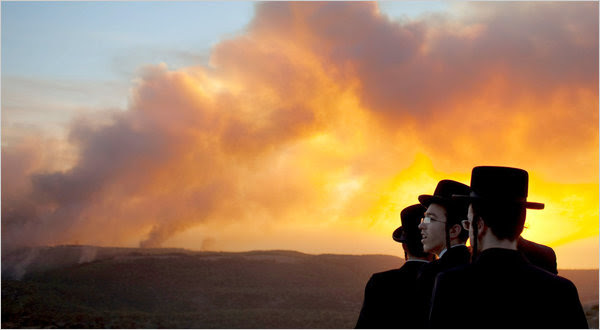 " G-d has changed gears and is allowing a fire to rage and destroy to remind us that G-d's destruction is more powerful than man's."

or, conversely, ALL the destruction (including mans) is actually god's destruction. how many times have we been "punished" by other people, and the punishment attributed to hakadoshboruchu by "great" rabbis? all pushing their current "rage dejour", as are you. maybe the punishment isn't because yesha isn't properly settled (what? we should be rewarded for what we've achieved in the face of such powerful opposition), but because of slimy business practices, or our electing slimy leaders, or (this is an old favorite) gay parades in jerusalem? if this fire is indeed a punishment, how can you be so sure what it's for? the ribbonoshelolam isn't always such a good parent- he doesn't always tell us why we're being spanked.

but he has so many people willing to speculate! like you. :)

Yoni, true that G-d keeps the score card secret, but this category is clearly written in the Bible.
I'll blog more about it.

Yoni: If you think this is harsh, you should go to this link (if you read Hebrew)! http://www.m424.com/last_news_7u.htm#part4 According to the "Voice of Mashiach," our top priority now is to take back the Temple Mount and build HaShem's house! (Don't ask why the Great Holy One wants a little house on earth -- He just does! He's still waiting for us -- He didn't have to wait so long for the builders of the 2nd Temple.)

Next in line is the settlement of the Land -- and woe betide the Jew or Jewess who doesn't resist with all his/her might the push to evict Jews from ANY part of Eretz haKadosh -- death and burning in Gehennom forever!

This "hot as hell" weather is G-d's way of punishing us. G-d has changed gears and is allowing a fire to rage and destroy to remind us that G-d's destruction is more powerful than man's.

You might be right. You might be wrong. And because you and God don't lunch, and He doesn't share his plans with you, you would be well to speak about his intentions and purposes with less certainty.

a, it's no secret what G-d is doing. I have the quotations here.
Read the Bible.