The legendary Harry Hurwitz has died. In recent years, my husband worked for him and with him in the Menachem Begin Heritage Center. Working for Harry included the bonus of becoming "family" with Harry and his wonderful wife Freida. 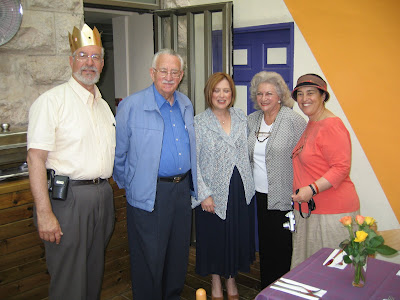 I last saw them when we traveled together to a wedding. 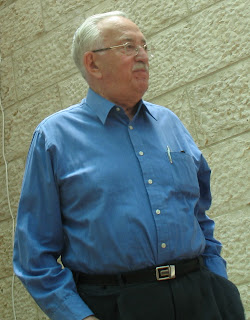 Harry Hurwitz, the founder of the Menachem Begin Heritage Center and a trusted adviser to the former prime minister, died Wednesday after suffering a heart attack on Monday evening.
Described as a "living Zionist" and a stalwart of the Anglo community in Israel, Hurwitz, 84, had worked at the center daily. Co-workers who wished him a happy New Year on Sunday could not imagine that they were seeing him for the last time.
"He gave a speech before Rosh Hashana at the gathering of the staff," his son Hillel told The Jerusalem Post.
"He worked a full day, every day. He continued to be involved in all of the activities of the Begin Center and its future planning," he said.
Hurwitz was already a member of the Betar movement when he arrived in South Africa in 1934, having heard its founder, Ze'ev Jabotinsky, speak the previous year in his native Latvia.
He once told The Jerusalem Post, "When I arrived in Johannesburg, there was very little Betar activity for the youngsters. This we set about remedying and by the time I was well into high school, I was head of Betar in Johannesburg and running new groups in the smaller satellite towns outside Johannesburg, where I used to travel by train each week."
For many years in Johannesburg, he edited the weekly Jewish Herald and was one of the pillars of the city's Jewish community.
But one of the most fateful meetings of his life occurred in 1946 in Basil, Switzerland, where he met Begin at a Zionist Congress.
Begin made an indelible impression on him, and a visit by Begin to South Africa several years later deepened the relationship.
The two remained in contact and were so close that in 1977, when Begin became prime minister, he asked him to come to work as his adviser.
Hurwitz served as information attache at the Israel Embassy in Washington, under then-ambassador to the US Moshe Arens, during the years Israel bombed Iraq's nuclear reactor in Osirak (1981) and invaded Lebanon (1982).
He was called back to Israel two months before Begin's resignation and was appointed his adviser on world Jewish communities.
Hurwitz was in South Africa on a lecture tour when Begin died in 1992, and immediately pushed for the creation of the Menachem Begin Heritage Center to document the history and legacy of the sixth prime minister of Israel.
He also wrote a book called, Begin: A Portrait and served as an adviser to former prime minister Yitzhak Shamir.
But it is for his work at the Begin Center for which he has been most known in the last years.
In 2001, The Jerusalem Post mistakenly published his obituary, after confusing him with someone else who had died who had the same name. Upon reading the obituary, he quipped, "You can't remove me from the scene with the stroke of a pen."
"The first thing I did after reading my own obituary [yesterday] was call up my friend Shmuel Katz who wrote it [at the paper's request] and thank him for all the lovely things he said about me," said Hurwitz. "Not everyone has the privilege of reading their own obituary, and it was a lovely one."
Hurwitz said at the time he had heard that premature obituaries are considered a sign of a long life, and added, "I still have a lot of work to do."
He is survived by his wife Frieda, their son Hillel, three grandchildren and two great-grandchildren. The funeral is planned for Friday at 11 a.m. at the capital's Har Hamenuchot Cemetery.
Shiva is at Hanahliel 4/2 in Jerusalem. For more details, call the Heritage Center at (02) 565-2020.

Harry was a very special man. I feel truly privileged to have been welcomed by him and Freida into their family.

He accomplished a lot, more than most people, but he had a long list of "to do's."