It's customary to read Kohelet the Shabbat of Succot. I must admit to reading the English translation, but I did study the Book in a Bible class, and in Hebrew. So my knowledge of the book isn't all that superficial.

A couple of years ago, there was a blogging debate about when King Solomon actually wrote it, before or after Shir Hashirim, (The Song of Songs,) and Mishlei, (Proverbs.) I hold a very minority view about it. I think he wrote it first. The writing of Kohelet was cathartic, helping him mature past his "excesses." Only afterwards could he have written the other books. But that's not the main subject here.

When King Solomon writes that the riches, the "good things in life" are all Havel Havelim, hot air, nothingness, norishkeit, he's preparing us to leave our comfortable, sturdy homes and move into temporary huts, succot. One of the main requirements for a succah is a special roof. It can't be solid. It must be fragile. The walls of the succah may be strong, even permanent, but not the roof. It's made of s'chach, leaves, branches, wood. You must be able to see the sky. The roof is the part of the house which protects, and davka, the roof of the succah is the most problematic. 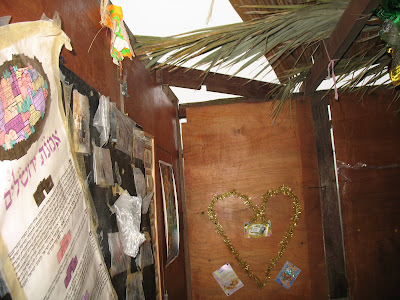 When we're in the succah, we connect with G-d. G-d is our building engineer, the inspector.
During the Od Avinu Chai March, which this year took place in the hills near Shiloh, our local Rabbi, HaRav Elchanan Bin Nun spoke to us. He described the succah as protection. I wish I had recorded his words. 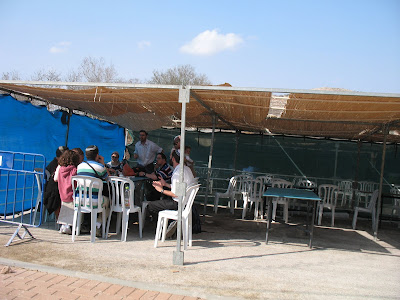 Back to King Solomon's words in Kohelet. King Solomon "had it all," and in the end he realized that it's hevel, nothingness. It isn't the fancy homes which keep us safe, it's living G-d's commandments in the succah, which seems so flimsy.
Rav Elchanan spoke to us two days after our neighbor, Yehudit's, funeral. The actual topic of the Rabbi's talk was the community of Givat Harel, named after one of his sons, who was murdered by Arab terrorists.
L'illui nishmatam:
Harel Oz ben HaRav Elchanan
Yehudit bat Shmuel Shachne
Posted by Batya at October 18, 2008

Mo'adim lesimcha! Thanks for your interesting post on Kohelet. I hope you and your family are enjoying the wonderful days of Soekkot!

Thanks so much and chag sameach.