In Biblical Times, Shiloh was the place of pilgrimage, for 369 years, from when Joshua brought the Jewish People there and set up the Tabernacle, until Eli's death.

During the thousands of years since, the occasional pilgrim came here, and connected to its permanent holiness.

We've been back since January, 1978. There's a vibrant Jewish community in Shiloh of hundreds of families. One of our modern customs is a Succot March in memory of Avihu Keinan, who was killed in a badly planned army action. For the first five years, we marched to Jerusalem as a protest against the perverse, distorted morality of the government and army which values the lives of our enemies more than the lives of our soldiers. 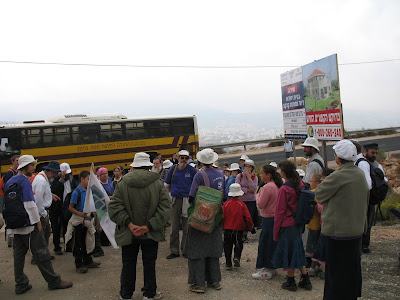 This year, it was decided to do it differently. Instead of marching in protest to Jerusalem, we hiked through the nearby mountains around Shiloh to celebrate our living in Eretz Yisrael. 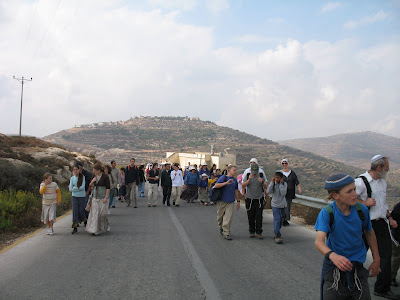 During our earlier years in Shiloh, we hiked the holy hills frequently. My children remember walking all over the nearby hillsides. For many of the children with us this morning, it was the first time they had wandered so freely in the nearby countryside.

As you can see, there is so much empty, uncultivated land, just waiting for us.

We started off at the cemetery, so Avihu's father could visit his grave, and then we were bussed part way to Maale Levona, southwest of Shiloh. There Rafi Fisher gave some historic background. From there we walked to one of the hilltop communities from where we could see Givat Harel. It was there where our rabbi, Rav Elchanan BenNun, Harel's father, explained the history and special signicance of the location his older sons chose to establish a community in Harel's memory. 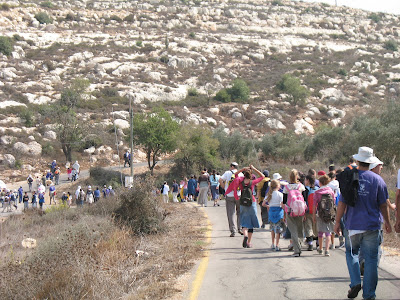 The hike continued and ended up at Tel Shiloh, where there are great celebrations and activities today and tomorrow.

There are tours, arts and crafts workshops, music, and street theater. 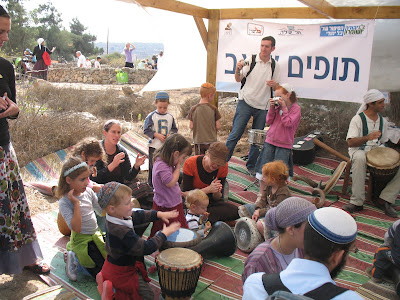 And for those who wanted food, there's the Tabernacle Gallery Cafe. 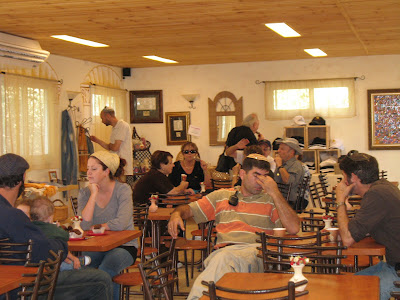 A very large succah has been set up outside.
Posted by Batya at October 15, 2008