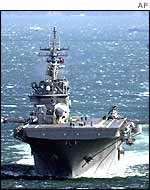 The US Navy is sending three warships to the eastern Mediterranean Sea in a show of strength during a period of tensions with Syria and political uncertainty in Lebanon.
Adm. Michael Mullen, chairman of the Joint Chiefs of Staff, told reporters the deployment should not be viewed as threatening or in response to events in any single country in that volatile region.
"This is an area that is important to us, the eastern Med," he said when asked about news reports of the ship movements. "It's a group of ships that will operate in the vicinity there for a while," adding that "it isn't meant to send any stronger signals than that, but it does signal that we're engaged, we're going to be in the vicinity and that's a very, very important part of the world." (complete article)

IMHO, it signals that the US considers itself in charge and sovereign, though in foreign and international waters. I wish it would butt out and leave us alone. All the "help" from the US, UN and Europe has accomplished, has been to strengthen and embolden our enemies.

Israel is under attack. The cities the Arabs have been bombing are all pre-1967. Olmert and his cohorts are incapable of defending Israel and defeating our enemies. In another two weeks, it will be Shabbat Zachor, when G-d reminds us to totally annihilate Amalek. It is read in the "tune" of every Jewish ethnic group to make sure that we all understand that it is our personal individual responsibility to destroy every last iota of Amalek, when and wherever we are.

May You Have a Peaceful and Blessed Sabbath