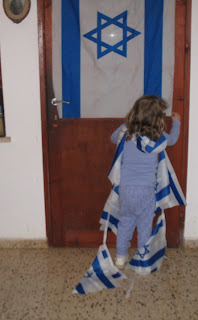 Yes, I do have opinions, and I do have a legal right to vote, but none of the candidates in the United States Presidential Elections will get my vote. Actually, I've never voted, having made aliyah at the age of twenty-one, just a few months before the November date. Yes, in those days, one had to reach the ripe old age of 21.

In the early years here, we were oblivious to the possibility of "Absentee Ballots," and by the time I had learned about it, it seemed so unnecessary.

Whatever political energies I have must be invested here. There's something very dangerously sick in the Israeli psyche. I'm not a professional psychologist, psychiatrist or even social worker, so I can't give you the proper term. The politicians and much of the public do not want the responsibilities of a true national independence. This is dangerous and frightens me.

It shouldn't matter to us who is the American President if we are truly independent.

The Israeli public hasn't a clue. The farcial absurdity of their panting after lame duck Bush, totally oblivious and ignorant of his lack of both U. S. public support and actual power, is proof of their unfamiliarity with American politics.

I hope that here in Israel, we will end up with new elections before the United States. We must use every type of pressure to get Olmert and this band of Knesset Members out of office!