I'd Prefer A Smart Defense Minister 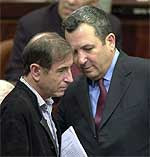 I couldn't resist countering the headline. It was so obvious.

Ehud Barak is the guiltiest of the guilty for the deterioration in Israel's security. His general military "philosophy" promotes technology over human intelligence. The officers making decisions, according to his method, sit in control booths, manning the screens etc. He promoted the phasing out of "acharai," "after me," the famous Israeli battle cry.

Barak has been "wow-ing" politicians with his sales pitch for all sorts of electronic machinery to substitute for human soldiers. Look, technology has its place, like those miniature cameras and clippers sent into human bodies instead of a lot of the "exploratory surgery," which was once the norm. A lot of the mistakes in the last war, which cost many human lives, were caused by improperly made decisions. War is fought on the ground; it's not a computer game.

Well, if Barak thinks he's so smart, he can be the fence at the Egyptian border!
Posted by Batya at February 24, 2008

(If Barak were the fence at the Egyptian border, would that mean he's a trafficker in stolen goods? ["Fence"])

oooh, that's a good one