It's Charisma And Other Things

The US press and pundits are already autopsying (is there a proper verb for that?) Hillary's nose-dive as front-runner in her quest to be the first female US President. Officially the race isn't over, but it's over.

From my vantage as an expat and fellow-baby boomer, it seems that the press never liked her, but the public didn't either. You need one of those fan clubs to be elected US President.

It looks like Hillary will have to make do as Senator.

I have this feeling that if she had dumped Bill, showed warm and true human emotion, other than ambition and dependence, she would still be the front-runner. There's something very manufactured, calculated, plastic about her.

Now, can Obama be elected? Would middle-America go for him? I don't think so. He also seems manufactured. His standard speech about "change" reminds me of the writing exercise I did in college. We had to write a cliche` of a politician's speech. I wrote:

To be human, he must reveal something about himself, what it is like to have been raised as he was raised, in different societies and religions. All we know is that as a bi-racial, he identifies with his black side. 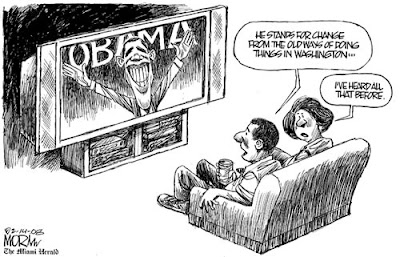 No, I don't vote in US elections. Let's see how my predictions go.

Email ThisBlogThis!Share to TwitterShare to FacebookShare to Pinterest
Labels: Bill and Hillary Clinton

Sadly a large number of people in the U.S. are naive enough to think Obama means what he says. All he has to do is smile and ramble on about change and hope and sheeple are following him in droves. Even worse is that Hillary is able to pull in the numbers that she does despite the public and media hatred for her. McCain has a good chance to pull it off but he is definitely not the country's first choice for president. Like Bush, he would be the lesser of the evils.

So, from what you're saying, there may be a very low turn-out next November. The reason will be: "There's nobody to vote for."