The Battle Cry Makes Me Nervous

Today didn't go as efficiently as I planned, but maybe the delays in my traveling to Jerusalem were for one reason and one reason only, to find myself in the middle of a demonstration.

I was on my way to the Israeli Museum, and the bus wouldn't turn in. Considering that I had watied over 40 minutes for the #9, knowing I could have walked there in just over 20, I didn't appreciate the extra walk. But then I found myself approaching a demonstration. Yes, every normal citizen should be demonstrating against Olmert. What kind of Prime Minister refuses to attack those who constantly launch missles at innocent civilians? 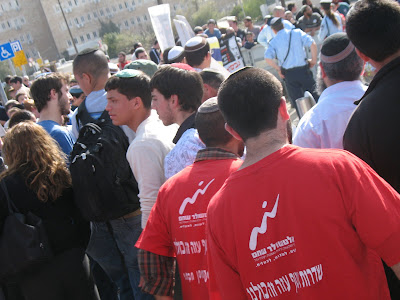 The Arab terrorists have been bombing Sderot for years. The blitz couldn't have had been much worse. Finally, people are getting angry. Two brothers were seriously injured on Shabbat. 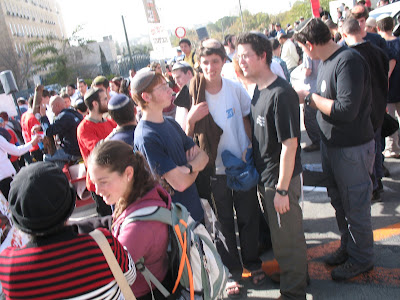 I walked by taking pictures. The main slogan was:
"Olmert, Resign!!" 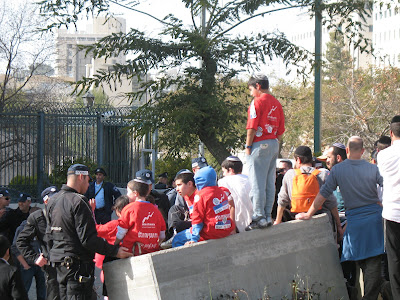 Then I passed a group of children leaving the scene. Not only did they shout, Olmert, Resign!!" but they also shouted:

That made me very nervous. People are so disgusted with the situation in the country and the inept, at best, politicians. Arkady Gaydamak has used his wealth to give the citizens of Sderot "vacations" from the war, while Olmert does nothing. The people of Sderot feel more secure asking Gaydamak for help, than asking the government.

I fear that our country is being set up for a dictatorship, G-d forbid. In a sense we have one already. That's the way the government of formed by those writing the original laws. I asked a lawyer who specializes in the Israeli Government about my idea of suing Olmert. I was shocked and horrified to learn that as Prime Minister he has a lot of leeway without being required to bring his proposals to Knesset. That doesn't include giving our land, Capital City, to another country. But he does have the legal right to make other promises, without due process, checks and balances, or any of the things I was taught in my New York Social Studies lessons. According to Israeli Law, if the Knesset members don't like it, they can vote him out. Of course, if they do that, they, too, may lose their jobs after new elections. That's why, as much as many of them rant and belly-ache about Olmert, Peretz, Barak and Livne, we're still stuck with them.

Also, the "electoral reform," which Olmert and Lieberman were touting is engineered to make an even "more stable government," meaning more power to the Prime Minister, making it even more difficult to get him out of office. District voting for Knesset Members won't make things any better, either. The most important "reform" would be a government with "Balance Of Powers," so no single branch, Executive, Judicial or Legislature could act without approval of the others.

I wouldn't bring in Gaydamak, but I agree that Olmert is not doing his job to defend and protect the State of Israel. His policies can only bring tragedy. G-d willing, Olmert will quickly resign and totally disappear from public and political life.