Why Don't They Demand That The Kassams Be Stopped? 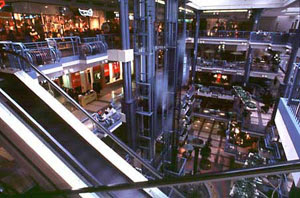 It's not going to help. Most injured weren't home. Next they'll be demanding rocket-proof umbrellas or a rocket-proof tunnel system. Or maybe they just want to build a new Sderot underground.

Israelis wouldn't go for giant city-like space stations, since it would be too hard to visit or host relatives. How would the bubbies send weekly gefilte fish or the savtot the tradtional Shabbat kubbe?

Tonight on the news someone actually asked if wouldn't be wiser to "l'tzamtzem," move the border to make it "safer." Try to run away from the kassams, as if the Arab terrorisits wouldn't bring the kassam launchers closer.
That was just after a government official, who may have been Vilnai, Ass't Defense Minister, using that same verb, "l'tzamtzem," to say that the "war aim" will be to "reduce" the kassam attacks.
I think I'm going to "l'tzamtzem" my time on the computer right now and sign out.
Posted by Batya at February 17, 2008

I'm all in favor of "l'tzamtzeming" all the hostile goyim right out of our Land -- in its widest borders!

And what about the "hostile" Jews?