Is This Some Sort of Perverse "Urban Renewal?"

The site of 9/11, the destruction of the Twin Towers by Arab terrorists and the subsequent plan and approval and support by Mayor Bloomberg of a fifteen (yes that's 15) story mosque and Moslem cultural center...  This is starting to read like a George Orwell novel, even less believable than 1984.  Most New Yorkers totally oppose the plan for a mosque near ground zero. 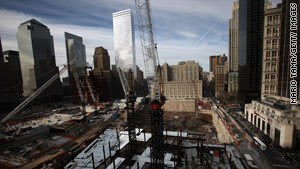 Many Moslims consider the construction of an Islamic center there a victory for their beliefs.
There are many things your typical New Yorker wants to see in place of the destruction of the World Trade Center, but symbols of Islam aren't among them.  Mayor Bloomberg's unabashed support for the project is definitely related to the "self-hating Jew" syndrome and cancels out his donations to the Magen David Adom center in the entrance of Jerusalem in the minds and hearts of many.
Posted by Batya at August 08, 2010

as israelis, im not sure we have a dog in this fight.
and one can make the argument that just because the 9-11 attackers were muslims does not mean that all muslims are terrorists, or supporters of terror.
and the mosque is a few blocks from ground zero, not really as close as all that.

It's a sensitivity issue. New Yorkers are highly, hyper-sensitve to the idea of a large mosque in view of attack.

maybe so.
but i dont think sensitivity is a reason to ignore freedom of assembly/religion.
but really, america can do what it wants as far as internal affairs goes. i dont like it when the us or other countries nose into my internal affairs...

Unfortunately, muslims are disproportionately involved in terrorism, so it's hard for many to consider an Islamic center just a benign cultural assembly.

Islam advocates terrorism and a global totalitarian subjugation of all non-Muslims to Muslims.

If the so-called free world wishes no longer be so, that is their decision.

Otherwise, any nation or people who ban Islam from their midst should be praised and supported.

An example of too little too late.

Freedom of religion and assembly does not mean that the Muslims have the right to have a bombastic outreach center right smack in such a visible place. They can pray in some inconspicuous place in a neighborhood where there is a significant Muslim population.

I was saying something much more encompassing about Islam.

You're right. I was being too pc.