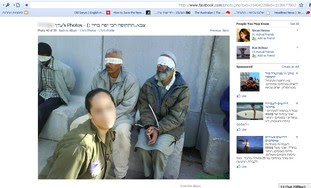 Big international news has been that former female IDF soldier's facebook pictures with blindfolded Arabs in the background.

No doubt that Eden Aberjil showed foolishness and total lack of understanding.  No excuses, but...
Why the but?  So many of our Israeli politicians and media stars are no less mature and responsible.  They don't think of their words and actions as moves on a chessboard.  Yes, a chessboard.  Everything we say and do has repercussions.  It's common for Israeli politicians and media to apologize too soon, to lay blame incorrectly etc.
They also give out too much information.  There was a time when if Arabs, whether terrorsts or enemy armies shot rockets at us, there would be no hints about where they landed, so the Arabs wouldn't be able to fine-tune their aim.  Now exact locations are broadcast for all the world to know.
Eden Aberjil is just a typical Israeli, for good or for bad, nothing to be proud of.
Posted by Batya at August 17, 2010

She undoubtably knew that as a soldier she could not publish the pictures. To do so now is REALLY beyond stupid.

A lot of people put very inappropriate personal stuff on facebook. They act oblivious to the dangers and ramifications. You're right here about her being aware enough to post them after her release from the army.

Even though blind-folding prisoners isn't a big deal it gives Hamas and other terrorist groups faux justification for kidnapping soldiers.

Shalom!
She's not quite as stupid as the soldier who took a picture with a cell-phone in a top secret room with codes on the wall, and posted in on Facebook, totally oblivious to the codes. I hope that the IDF is briefing soldiers more carefully now.
Unfortunately even if the news media didn't broadcast exact locations of missile hits the fifth column in our midst would.

Then there's the treasonous American soldier who leaked all sorts of classified documents to the leak web site.

What in the world has gotten into the military?

Keli, there are security reasons for the blind-folding. It doesn't justify "kidnapping soldiers." And this case isn't treason, just stupidity.

Hadassa, the kids in the army aren't prepared for the responsibility. Too many too imature.

of course it doesn't justify kidnapping soldier. I only meant that Hamas and their allies twist things around for PR purposes.

As for the soldier, what starts as stupidity could lead inadvertently to more serious security lapses

I wouldn't have minded had the IDF officially confiscated all materials found and put them up for public auction or donate them. But these guys plundering for personal gain is just pathetic.

Some time in the brig and dishonorable discharges are in order.

I agree with you on that, Shy. It's one thing to confiscate lap tops for sources of intelligence information.

Quite another when it's for personal use.

Besides the media is reporting it as if the IDF stole the lap tops.

Big difference between stealing and confiscating.

And in the case of the later it should never have been leaked to the public.

That Lt. should serve time in the brig, be dishonorably discharged, and under surveillance after serving time in prison.

At a minimum security clearance revoked or demoted.