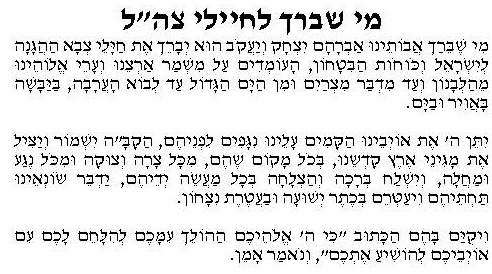 
He Who blessed our forefathers Abraham, Isaac and Jacob - may He bless the fighters of the Israel Defense Force, who stand guard over our land and the cities of our God from the border of the Lebanon to the desert of Egypt, and from the Great Sea unto the approach of the Aravah, on the land, in the air, and on the sea.


May HASHEM cause the enemies who rise up against us to be struck down before them. May the Holy One, Blessed is He, preserve and rescue our fighting men from every trouble and distress and from every plague and illness, and may He send blessing and success in their every endeavor.


May He lead our enemies under their sway and may He grant them salvation and crown them with victory. And may there be fulfilled for them the verse: For it is HASHEM, your God, Who goes with you to battle your enemies for you to save you. Now let us respond: Amen.

This is from the National Council of Young Israel
Posted by Batya at June 04, 2010


(And please disregard what Bibi said on CNN about praying for the fake peace activists).

Bibi's trying to score points for the wrong team.

i'd rather prey for those injured innocent peacefull activists.

If you lie down with terrorist dogs, you'll wake up in the hospital - if you're lucky.

Normal people around here will pray for the IDF's injured and for the future success of not letting a single blockade runner in, whether that means turning them around or sending them to a sandy bottom.

Normal people around here would pray for ending the Gaza blockade and for regime change in Israel.

They were terrorist enablers, each and every one of them.

So are you, come to think of it.

May you all rot.

Shy, read carefully, a, wrote "prey" meaning that a wants to attack us instead of the faux-peace activists.

Just because a moonbat read "Phun with Fohknicks", doesn't mean they were punning with words.

In honor of the anonymous enemy of my people:

Turkey, IHH on the Defense

Glenn Beck on the flotilla of fools

I was teasing about his spelling goof.

Serves me right for teasing; I always warn not to.

Batya, you can easily identify your teases by ending them off with the line:
/sarc

I ment "pray" of course. :)
nobody wants to attack you. Neither those activists nor me. :)

Glenn Beck? No thanks, I never listen to anything Fox Noise says - it's pure pro-israeli propaganda and has mostly nothing to do with the truth.

And sorry but i'm not terrorist enabler (what a term!) just because I criticized IDF's action. Nor I'm your enemy just because condemned killings of those activists. British PM has condemned it too - does it make him your enemy? What about the UN - are they your enemies too? Just curious XD

a, I was sure that typo was freudian...

Who are you to say that the "activists" had no plans on attacking?

The British PM is no friend of mine, and it was proven that some of the passengers were paid mercenaries to attack Israelis who boarded the ship etc.

Someone coined a nice (maybe too nice) term for the likes of "A" here:

And, yes, "A" her is a terrorist enabler, plain and simple.

Shy, it's so much better when we agree.

Batye, did the activists on the ship have some sort of "duty" to allow armed commandos to attack them without resistance? So if someone resists a home invasion it's their fault?

Oh, I forgot...Israel should not be criticized no matter what... So Britains are no longer your friends? Good to know. I wonder who's next: France, the U.S.?

Shy guy, I'm not impressed by your terminology. I think it's stupid (as is it the one who made it up).

Here's a bit more terminology for you, jackass:

Your joker friends join Islamic terrorists on trips funded and supports by everyone from Jihadist "charity" organizations to radical left wing anarchists, they run a naval blockade and then you wonder why people got hurt.

Next time Israel should have the common sense to knock out the engines with armor piercing shells, give a 5 minute warning to abandon ship, and then fire below the water line and send the ship to its grave.

Do us all a big favor: be there. Your friends at Hamas just love infidel martyrs for their cause, you terrorist enabler.

a, you're ignoring the facts which were Shilowell-photographed. There were paid mercenaries on the ship who were paid to attack. Israel has every right to inspect. See Dershowitz's article.

Shy, wow! Such a temper. Please watch your language, though I agree with your intentions here.

oh, so we're starting calling names, Shy g*y? Are you running out of arguments already? Why don't you join Israeli commandos to attack activists next time? Yeah, I'm not buying your stupid terms. You don't see that Israel's violent actions strengthen the most radical elements within Hamas by making their claims plausible.

Batya, can I ask you why did Israel release those "dangerous" people if they really were mercenaries "paid to attack"?

Damascus sources say Syrian president proposed new initiative to Turkish PM to use international pressure on Israel in order to lift Gaza blockade. This is going to be interesting...

a, I'm furious about Israel's releasing of the mercenaries and activists. Typically dumb of them who don't have the guts to be true reliable leaders.