"Hamas: We won't let Red Cross visit Shalit " Nu? Where are the Protests? 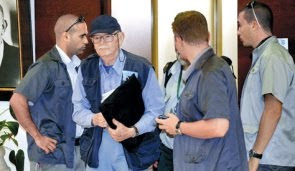 "Shalit's parents have pledged to camp outside the prime minister's residence until their son is freed from captivity."

I agree that it's a disgrace that Gilad Shalit has been in captivity for four years, but the Israeli Prime Minister isn't holding him prisoner.  The Arab Hamas terrorists are, and international "aid" organizations like the Red Cross are cooperating with the terrorists.

If all these "human rights" and "aid" organizations really did their job, they'd be protesting day and night against Hamas about the imprisonment and isolation of Gilad Shalit.  They aren't because they don't care.  They have no problem when innocent Jews are imprisoned.

The protests should be against them.  Jews and all world citizens who truly care about civil/human rights should stop contributing to or donating to all those organizations which aren't doing their jobs.  The Red Cross is at the top of that list.
Posted by Batya at June 24, 2010

Israel could have been holding hostage 100s of terrorists and executing them as well, so long as Shalit is not returned.

The pacificity of Israels's governments since the kidnapping has been barbaric.

So, what's to disagree with me about that?

You say pin the blame on Hamas. That's obvious.

But since Hamas' kidnapping, it is the Israeli government's fault for not taking advantage of numerous opportunities to force Hamas to make many a painful decision whether it's worth their while holding on to one of our boys.

Shy, focusing on the govt is the wrong thing, like pre-Disengagement when Moetzet YESHA went for "Let the People Choose" instead of the bottom line of no Disengagement.

a, not an easy situation, but Bibi isn't the enemy. He's not being strong enough, but he wasn't PM when it happened.

Was Netanyahu the PM who we released prisoners back to Gaza earlier this year?

Was Netanyahu the PM who released the confirmed terrorists who were on the boats a few weeks ago?

There are other examples. Too many of them.

The signs have to be the right signs. The demands the right demands. It's not enough to say:
"Bibi, get Gilad home!"