Iceland's "Flatto-Sharon" or Politics is A Joke, Isn't It? 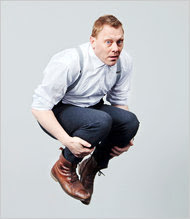 As all the great comedians agree (nu, Benji) the closer your "spiel" is to reality, the funnier it is.  Israeli political history has some great comedic moments, such as the election to Knesset of French fugitive Samuel Flatto-Sharon, who was fleeing arrest on corruption charges in France.  As an Israeli Knesset Member, he'd be safe, and that was the theme of his campaign.

That's what I thought of when I read about Reykjavik, Iceland's new mayor, Jon Gnarr.  He started the Best Party as a joke, but is the joke on him or the citizens of Reykjavik?

When I was a university student, we had an assignment to write a political campaign speech with lots of cliches.  I remember one of the lines I wrote.  I think it's even better than Obama's "Hope" theme, which said nothing, but Americans colored it with whatever they wanted which helped him win that lop-sided landslide victory.  It promised them anything, but gave them a joke.

Shalom!
I like your campaign line. It's what every politician tries to convince us that he or she thinks. Has any politician ever said that in a speech? I can imagine it slipping out, "And furthermore, I'd like to add: I want what you want."
P.S. If I'm not mistaken after his foray into politics, Flatto became a call-in talk-show host.

Thanks
I wouldn't put that line so far at the end.
"Remember friends. I want what you want. We're on the same team. Vote for me."

I could never understand how people could like Flatto-Sharon, though you have to admire the chutzpa and honesty. He never claimed to care about others.