Does It Pay (Or Is It Safe) To Help Israel?

Theatre of the Absurd?
Chelm?

A few months ago it was revealed that a son of a high-ranking Hamas Arab terrorism leader had spied for Israel.  Mosab Hassan Yousef now lives in the United States and his right to live there is now being challenged by Homeland Security.  They want him deported for the role he had to play as terrorist while actually helping to stop terrorism.

Deportation to his childhood home would be a death sentence. 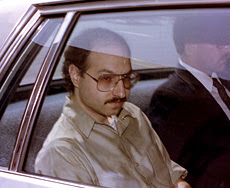 I hope that Israel won't abandon him the way our government has abandoned Jonathan Pollard.

Their stories are very different except for the "bottom line" which is that the United States does not consider Israel a true friend and ally, and the State of Israel knows neither how to to defend its needs nor the secrity of those who've risked their lives for us.
Posted by Batya at June 30, 2010

i hope yousef makes it out of this alive, and i'm glad the shabak is trying to help, but he really isn't making it easy. he wrote an autobiography detailing his betrayal of his community (complete with photos), had his face plastered all over the news media while promoting the book, and publicly converted to christianity. these are not the actions of a (former) muslim who wants to live. his only chance seems to be a job with american intelligence complete with plastic surgury, relocation and bodygaurds for life. if the u.s. doesn't think he'll be useful enough to warrent such expense (and after all he already spilled what he knows in his book) his chances are slim.

also, he can't be "deported to the west bank". israel controls all entry to judea and samaria, if he makes it to ramallah it will be israel's responsibility, not the u.s.'s.

My guess is that he calculated that fame would keep him safe, rather risky.