How Did they Get Their Weapons? 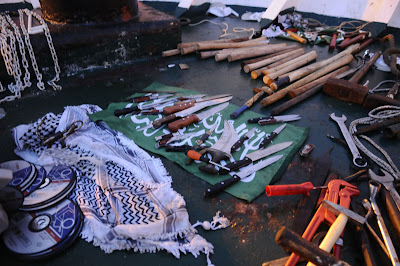 Many people are probably wondering how the “peace activists” aboard the Mavi Marmara ship [the one ship of the six in the flotilla that contained about 40 IHH terrorists] obtained the weapons they used to attack the Israeli Navy commandos.

From an article, of all places, in Ha’aretz:

In a report published this week, a group of independent investigators from 's intelligence community found that activists aboard the 'Mavi Marmara' were part of an organized group that was prepared for a violent conflict.

The report, published by the Intelligence and (known in by its Hebrew acronym Malam), said activists who attacked commandos with clubs and knives were supported by the Turkish government.

Malam is a privately run but is widely seen as an unofficial branch of 's intelligence community and has in the past been a medium for passing 's intelligence findings to the public.

The report said while most of the Mavi Marmara's 500 passengers were humanitarian volunteers who underwent security checks before boarding the ship at in , a group of 40 IHH activists had boarded the ship in an port beforehand, keeping apart from the rest of the passengers throughout the journey.

This hard core of activists boarded the ship without checks and was equipped with communications equipment, flack jackets embroidered with Turkish flags, and gas masks, Malam said.

Their main objective was to hold back soldiers by any means, and to push them back into the sea.

As they had been banned from bringing weapons aboard, IHH members improvised weapons including metal rods and knives cut from the ship's metal rails, which they used to attack the soldiers.

According to a witness aboard the ship, a confrontation broke out when the ship's crew heard IHH members sawing the railing into metal rods, but they were unable to confiscate them from them.

IHH activists also gathered all the knives from six cafeterias on the ship, as well as axes from fire extinguishers on the deck, all of which served as weapons against Israeli commandos .

Before the takeover, IHH ordered all other passengers into the hold of the ship and told them to remain there. Only journalists and security personnel were allowed access to the deck.

By the way “Eight of the nine dead were identified as IHH members.”

And to top it off:

Files found on laptops owned by the IHH members pointed at strong ties between the movement and 's prime minister. Some of the activists even said that Erdogan was personally involved in the flotilla's preparations.

Is it any wonder that ErDOGan says things like, “Turkey president: Israel will suffer consequences for Gaza flotilla mistake”?