One of the women who comes most months to pray in Tel Shiloh on Rosh Chodesh sees and describes buildings and rooms from the old building blocks scattered around.  It's a living and vibrant town for her.  She helps us picture and hear Eli and the other priests leading the pilgrims in prayer.  Recently she participating in an "open house," when the archeologists invited people to join digging for the day among the ruins where the Holy Mishkan, Tabernacle stood for 369 years during the Time of the Judges.

Shiloh certainly isn't the only location in Israel being explored, dug and investigated by archeologists.   A section of the Kotel, wall which surrounds the Temple Mount is also being dug.  The world certainly knows that the Muslims, a much newer religion, have been fighting the Jews for it.  But how many know that thousands of years earlier, the Romans fought the Jewish People for Jerusalem and other parts of the Holy Land?

On the eve of Tisha B’Av, artifacts were exposed that breathe new life into the story of the destruction of the Temple in Jerusalem:

A sword in a scabbard that belonged to a Roman soldier and an engraving of the Temple’s menorah on a stone object were discovered during work the Israel Antiquities Authority conducted in the 2,000 year old drainage channel between the City of David and the Jerusalem Archaeological Garden

The channel served as a hiding refuge for the residents of Jerusalem from the Romans during the destruction of the Second Temple.

A 2,000 year old iron sword, still in its leather scabbard, was discovered in work the Israel Antiquities Authority is doing in the channel, which served as a hiding refuge for the residents of Jerusalem from the Romans at the time of the Second Temple’s destruction. In addition, parts of the belt that carried the sword were found. According to the excavation directors Eli Shukron of the Israel Antiquities Authority and Professor Ronny Reich of the University of Haifa, “It seems that the sword belonged to an infantryman of the Roman garrison stationed in Israel at the outbreak of the Great Revolt against the Romans in 66 CE. The sword’s fine state of preservation is surprising: not only its length (c. 60 cm), but also the preservation of the leather scabbard (a material that generally disintegrates quickly over time) and some of its decoration”.

A stone object adorned with a rare engraving of a menorah was found in the soil beneath the street, on the side of the drainage channel. According to Shukron and Professor Reich, “Interestingly, even though we are dealing with a depiction of the seven-branched candelabrum, only five branches appear here. The portrayal of the menorah’s base is extremely important because it clarifies what the base of the original menorah looked like, which was apparently tripod shaped”. The fact that the stone object was found at the closest proximity to the Temple Mount to date is also important. The researchers suppose a passerby who saw the menorah with his own eyes and was amazed by its beauty incised his impressions on a stone and afterwards tossed his scrawling to the side of the road, without imagining that his creation would be found 2,000 years later. (complete article) 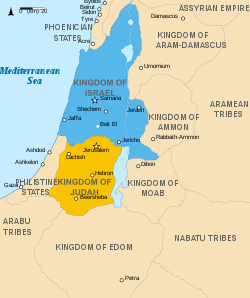 Even the most secular of the Israeli archeologists find themselves proving that Biblical stories are rooted in facts, proven by science.
Posted by Batya at 10:13:00 PM