Great orators speak in an effortless though powerful way.

The words fly from their lips as if spontaneous. The great orator's eyes are on his/her public, not on paper or a teleprompter. 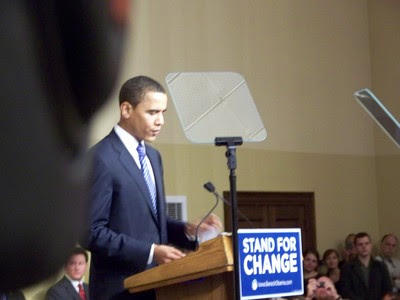 How could anyone consider Barack Hussein Obama a great orator, when he's totally dependent on a teleprompter and his words are frequently halting, like a student struggling over a hard to read text? Apparently he has mesmerized the American public, but that doesn't mean he could hold his own against any truly great speaker.

I think that the infatuation of the American public with Obama is like those convinced their in love, because they're in love with the idea of love.

Obama's speeches may be well-written, but all the clips I've heard of him speaking have been disappointing. His speech isn't natural and fluent. I hope that he ends up being a better president than orator.

I know a lot of people are afraid to admit that Obama is anti-Israel and in all reality, anti-American--but his agenda is become more and more apparent.

On Shabbos, the AP reported that Obama is now calling the war in Afghanistan a failure (like his opinion on the war in Iraq) and saying that he wants to open "dialogue" with the TALIBAN!

Can you believe the chutzpah of this guy? Where is the outrage in America that he would want to negotiate with a terrorist faction that has killed countless Americans?!?

This guy is serious danger to the entire western world, and America had better wake up and realize this soon.

Achashverosh was an emperor, highly evil and yet super dumb at the same time.

Some Purim Torah for thought.

Comrade he sounds like Israeli Leftists. Let the Americans get a taste of it.

Shy, your quotation reminds me of the beginning of the Passover Hagada, "avodim hayinu l'paroh.." "We were slaves to Pharoah.."

Batya, you can find the Talmudic reference to what I quoted in Masechet Megilah, somewhere around Daf 14. It is one of the reasons given why we do not say Hallel on Purim. And Paroah and Egypt are indeed mentioned there in the same breath.

shy, thanks for the additional reference.

Shalom!
If Achashverosh was super dumb how did he rule over 127 states for more than 12 years?
Commentaries on Megillat Esther reveal quite an interesting character... super dumb or rather shrewd, depending on the situation.
Shushan Purim Sameah!
Hadassa

Good question.
He definitely knew how to delegate authority, like giving his ring to Haman. And his "staff" enjoyed their "freedom," so they made sure he stayed in power.