When I saw a headline on yahoo about airline employees caught pilfering luggage, it reminded me of the conversation I had with a young woman I waited with in the American Consulate last week.

It can be very upsetting and expensive when you unintentionally come back from a trip with less than you took or packed. This woman had traveled on Alitalia with her family and only months later discovered that a couple of their American passports were missing. They had them all when they began their flight home, and the last time they saw them all was when the Alitalia official was checking them against the tickets. Arriving in Israel, not all were opened and checked, which sometimes happens when the clerks are trying to be helpful to families with a lot of little kids. Since they didn't count their passports on the plane, they couldn't start any police suit immediately. I just wonder if anyone else knows of similar stories.

The only other Alitalia story I heard was of a suitcase which disappeared when using that airline. Of course, everyone knows that a certain percentage of suitcases are stolen or lost on/from every airline and airport. But in this case, the owner was a thirteen year old girl, who was that difficult size and had had such a hard time finding clothes to fit. Her entire summer wardrobe was in the suitcase and so were her camp pictures. Classic Murphy's Law, it was the only time her family ever took a regular suitcase. They only travel with hand luggage. Their motto is "Buy new sun screen and nail clipper in every port." 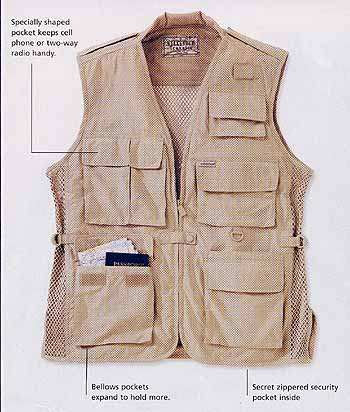 When I travel, I strap all valuables to my body. Some day, I must buy one of those old photographer's vests with lots of pockets of varying sizes.
Posted by Batya at March 22, 2009

The only time I had 'lost luggage' was when I had a transfer through JFK. I think the clerk assumed I knew what to do, but I assumed that the luggage would follow me to my destination.

Anyways, it took a day or so on and off contact with El Al lost in found in JFK, but they found it (I told them where I assumed it was) and it arrived to my hotel undamaged and unopened.

Given that, I could see how papers get forgotten with clerks though they are usually the ones to make sure you don't forget, they don't want the hassle of following up.

I once had a suitcase come a few days after me, even though it was a simple direct flight.
I always pack my most important things in the flight bag, ever since a neighbor told me how the dress she had brought for her son's wedding came too late.

Shalom!
Judging from the course of events it seems that the woman at the consulate and her family were dual Israeli/American citizens. If so, none of their American passports were checked at the Israeli passport control desk; only their Israeli passports were stamped.
Shortly before her wedding a friend of mine had a suitcase full of new clothes brought to Israel by her mother. Her mother waited and waited at the luggage carousal for it. After virtually all the luggage had been claimed, one suitcase remained. A suitcase almost identical to hers. Apparently the owner of the suitcase accidentally took hers and upon opening it realized that the contents were much more attractive than his/her own stuff.
Unfortunately the story didn't end with a "hashavat aveda".
Hadassa

Hadassa, maybe we should consider your story a lesson to "buy in Israel." Honestly, I get so nervous about things disappearing. Extra stress factors, as I have to plan my next kibbud av v'em trip.