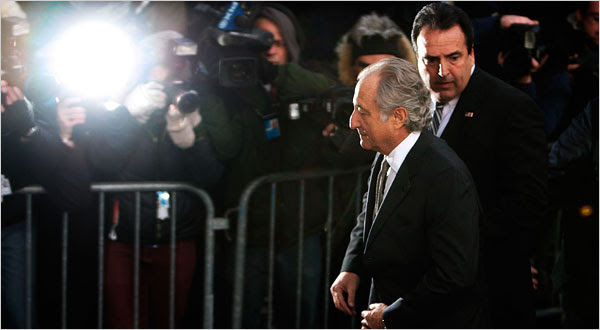 There's no way anyone can convince me that Madoff's sons and other high-ranking officials in his Ponzi scam pyramid business weren't aware of the truth that there were no investments and the "income" sent to investors was just the money that new investors entrusted to them.

No surprise that Madoff's lawyers are trying to get him more time at home to "tie up loose ends," or whatever excuse they can come up with.

"For many years up until my arrest I operated a Ponzi scheme," Madoff told the court. "When I began I thought it would be over shortly, it became difficult to stop." (complete article)

Does such a man deserve to be free? And yes, although he has been and would be "monitored," he would only be "restricted" to a home and conditions more luxurious than most people could imagine or afford.
I have no doubt that the investigators haven't discovered the full entire truth, and if Bernard Madoff was to be kept in jail, incommunicado, there's a better chance they'd find out who else was involved. They haven't cleaned out the "can of worms" much. One big snake's not the whole story. There's some deal, which hasn't been revealed yet, and when it is, it will probably stink even more.
Madoff's victims are angry and a lot poorer than they had ever imagined, but I doubt if any will become homeless tent dwellers like these (hat tip Boris):
Posted by Batya at March 15, 2009

If only they'd let us run the world...