The Other Side of CUFI (Part 1)

It promises to be an impressive event, but I remain concerned about certain individuals who are the driving forces behind CUFI. A number of parties have requested brief updates on the situation prior to the CUFI convention. I compiled a two part report:

Part 1 deals with Pastor Hagee’s beliefs and conflicting accounts of his approach to Jewish envangelism. It also brings up some difficult ethical issues and questions.

Part 2 is more disturbing and examines the activities of certain CUFI board members and directors who promote overt missionary activity, bolster the messianic community in Israel, vilify the Orthodox community, and fan the flames of anti-Semitism.
------
The following offers a mere glimpse of the missionary agenda and disturbing activities of certain individuals directing the organization Christians United for Israel (CUFI). This is by no means a conclusive or comprehensive paper.
The work is not aimed at discrediting Christians and their support for Israel, nor is it intended to sabotage positive aspects of Israel’s political and religious alliances. Rather, it is a call to order for Israel and the Diaspora Jewish community. And it will elucidate the need for us to responsibly monitor our relationships, as well as consider the obligations and ethical imperative incumbent upon the nation of Israel to transform any Jewish-Christian undertaking into an honest, accountable and fruitful endeavor.
Overview:
The Israel-Evangelical relationship is a largely unregulated multi-million dollar strategic partnership based on the faulty premise and policy of, ““the evangelicals are our best friends - don’t ask questions.”
As a result of this imprudent approach, fundamentalist Christians now have a political, legislative, economic, cultural, philanthropic, and religious foothold in Israel, as well as property holdings. Missionary activity is running rampant and unchecked in the Jewish state. The spiritual integrity and continuity of the Jewish people is in danger due to a lack of ethical accountability, legislation, and rabbinic guidelines. Israel has – with reckless abandon - embraced impassioned Christian leaders and organizations whose very raison d’etre is and remains evangelism.
Megachurch leaders like Pastor John Hagee had hoped to be able to forge an alliance – “ a match made in heaven” – between “50 million evangelicals joining in common cause with 5 million Jewish people in America on behalf of Israel” (1) Although he sits at the helm of a powerful and purportedly non-proselytizing organization, Hagee simply cannot control the minds, hearts, and agendas of myriads of Christian fundamentalists, nor can he seem to manage the direction of his own executive board members and regional directors — some of whom are promoting a Jewish Messianic (Christian) restoration in Israel, are signing recent statements calling for the conversion of Jews, and are giving air and press time to those accusing the Orthodox Jewish community of violence, church persecution, and religious freedoms violations.
In addition to a brief report on Pastor Hagee’s beliefs and conflicting accounts of his approach to Jewish envangelism, this report will focus the following personalities affiliated with CUFI:
Stephen Strang: CUFI Regional Director
Michael Little: CUFI Executive Board member,
Robert Stearns: CUFI Regional Director
James Hutchins: CUFI Regional Director

John Hagee:
There are conflicting reports as to Hagee’s position on Jewish evangelism. The differing accounts seem to be indicative of Pastor Hagee’s own evolving theology and flip-flopping on this issue. He is personally on public record for opposing organized and targeted proselytizing campaigns directed at the Jewish people, but at the same time he enthusiastically endorses efforts to spread the gospel in Israel.
As far back as 1988, Hagee declared in the Houston Chronicle that, “trying to convert Jews is a ‘waste of time,’”(2) and at that time it seems he had embraced the dual covenant theory. However, after a controversy erupted over press reports expounding on that belief, he backtracked from that stance in March of 2006 and stated in the Jerusalem Post that he does not “believe or teach Dual Covenant.” Theology (3). Hagee added that he had “made it a practice for 25 years not to target Jews for conversion” at any “Night to Honor Israel” events. If Jews “inquire about our faith at a later time, we give them a full scriptural presentation of redemption.”
When the Daystar Television Network first began broadcasting in Israel in 2006, Pastor Hagee declared, “It’s just all I can do to keep from getting up and dancing. It’s a joy and it’s a dream come true. If we are able to preach the gospel without reservation [in Israel]... it’s a major breakthrough.” Hagee noted that the Bible “talks about the gospel going forth from Jerusalem, and if this is in fact the announcement that the gospel can go forth without any limitations, without any editing and so forth... This is a first.”(4)
In February of 2007 a letter from John Hagee Ministries in response to an inquiry stated that,
“ the Jews are God's chosen people, BUT THEY ARE NOT SAVED UNLESS THEY BELIEVE AND ACCEPT JESUS AS THEIR LORD AND SAVIOR… The same need for the Jews to receive Christ as Savior exists as the need for the gentiles. Pastor believes that witnessing Jesus to the Jewish people ONE ON ONE is the most effective way instead of targeting them as a group or nation. Keep in mind that God has 'blinded the eyes' of the Jews and hardened their hearts for having denied Christ.” (5) 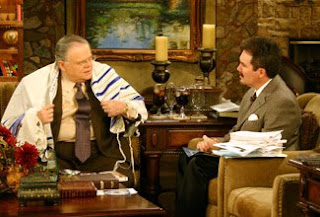 Up until March 2008 John and Diana Hagee’s name appeared as endorsers of the Messianic Ministry, MaozIsrael. The large Tel Aviv Ministry aggressively and openly proselytizes in Israel. Hagee’s name was removed just prior to his visit to Israel in April 2008. It should be noted that CUFI Executive Board Member, Michael Little continues to endorse MaozIsrael (6)
Pastor Hagee is, after all, a devout evangelical Christian and a powerful fire brimstone preacher., It would be dishonest to try and downplay or dismiss his absolute commitment to the gospel, and the role that plays in his aspirations for Israel. John Hagee Ministries posts the principles of belief and the following mission statement on their website. (7)

Mission: "The mission of John Hagee Ministries is to aggressively fulfill the commission that Jesus Christ gave to his followers to go into the world and make disciples of all people. Our purpose is to bring the lost to Jesus Christ and to build up and encourage those who are already believers. We pledge to our viewers & supporters to take The Gospel to all the World and to all Generations."
Pastor John Hagee has incurred the wrath of messianic and other evangelical groups because of his inconsistent and lukewarm approach towards overt Jewish evangelism. His toying with Christian theology caused such an outcry that he was compelled to do a rewrite on his book, “In Defense of Israel.”(8) But not unlike “messianic” congregational leaders, Pastor Hagee does promote a passionate Judeo-Christian agenda heavily infused with a gospel which theologically fuses Jews and Christians together. This should be reason for concern for any Jew or rabbinic leader who feels entrusted with protecting the Jewish faith and maintaining Israel as an independent single faith community. Hagee likes to refer to the “Judeo-Christian faith”, dons a tallit at church and on television, and sees “Christians and Jews coming together to stand together and be together forever."
To emphasize this point, there are messianic/Hebrew Christian banners featured at CUFI events. And the CUFI’s online shop prominently features a messianic T-shirt. 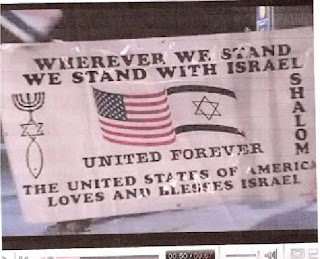 The Menorah (candelabra) represents God’s covenant with the people of Israel and the torah. The fish is a symbol for Yeshua, from the Greek word for fish, icthys, which was used as an acronym for Iosus Cristos, son of God, savior. The star of David, Magen David, literally shield of David, represents Israel and particularly the Davidic kingdom.The original symbol was patterned after emblems found on a number of artifacts believed to have been used by first century Jewish followers of Christ.(9)

The original symbol was patterned after emblems found on a number of artifacts believed to have been used by first century Jewish followers of Christ.(9) 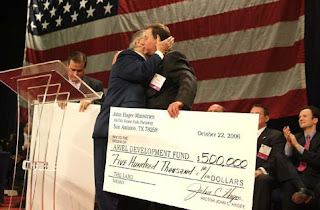 Hagee’s generosity and the unabashed Christian flavor to his donations does present the Jewish people with serious halachic questions:
(Pictured are checks being accepted from "John Hagee Ministries" and "Cornerstone Church")
Under what conditions can funds from Christian organizations be accepted?
a) Can Christian funds be used to build Torah institutions? b) Under what circumstances, if any, can funds which are donated in the name of a church, ministry, Jesus, or Christianity be accepted?
c) Is it appropriate to have publicized ceremonies featuring Jews accepting church funds? 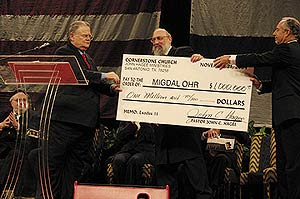 There are disturbing ethical questions, too.
1) Two months ago Pastor Hagee donated $250,000 to the One Family Fund .It was understood at the time that the funds would be allocated towards building a 5000 square meter bombshelter in Sderot. The organization diverted those funds and they are instead being used to reinforce the roofs of a synagogue and a school. Certainly worthy projects, but was Pastor Hagee, or a rabbi for that matter, consulted on the change in plans?

2) Pastor Hagee attempted to donate $25,000 to Mercaz Harav in memory of the terror victims of the yeshiva attack. Mercaz Harav declined the offer. Pastor Hagee then approached the Jerusalem municipality in order to funnel the funds through them for the terror victims. The municipality accepted the contribution and then a decision was made by the New Jerusalem Foundation to use those funds towards the building of a park. Did the mayor inform Pastor Hagee?

Shalom!
It's time we realized that there's no such thing as an innocent donation from a Christian group. The very name indicates that they don't accept Judaism for what it is or a true G-d. There are Bnei Noah groups for non-Jews who want to come close to G-d and support Israel.
Hadassa