Olmert Has Done His Homework 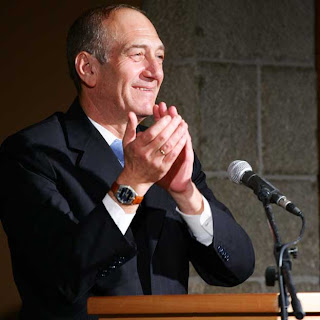 By announcing his future resignation, Olmert has set himself over his critics. He has taken the "high road."

This, of course, is worse for us. He is claiming to be a victim, not a repentant crook. I'm sure that he has made neither move nor statement without checking the legal implications. He's calculating and smart. Never, never underestimate him.

Too many people are cheering, but there's nothing to cheer about. His Kadima Party is in shambles as the "leaders" compete for the prize, stabbing each other in the front, back and center.

I'm just curious. Has Tzachi Hanegbi said anything? Is it possible that he's waiting in the wings as a "compromise candidate" when the dust settles and they discover that there isn't anyone with sufficient backing to take over?

Tzachi is not like his mother. She, Geula Cohen, can't fake anything. She's honest with her ideals for all to see. Tzachi has been at Olmert's side, silent, helping, watching, waiting.