the Other Side of CUFI (Part 2)

For the purposes of the second half of this report, please keep in mind that the term “messianic” refers to those calling themselves “messianic Jews”, “Hebrew Christians”, or “Judeo-Christians”. While some of these people consider themselves “Jewish believers in Jesus”, they are indeed practicing Christians with an aggressive evangelizing agenda.
At the inception of the current Evangelical-Israel relationship, many Israelis and members of the Diaspora Jewish community sought ways to distinguish evangelicals from messianics. As Haaretz reported, “ The Christian Allies Caucus, a Knesset lobby group that aims to further ties between the Israeli government and the Christian world, refuses to work with the messianic Jewish community on the grounds that it actively seeks to convert Jews. ‘We believe they work against the interests of the State of Israel,’ caucus director Josh Reinstein explained.” (1)
Unfortunately, it appears that - for many evangelicals – that borderline never existed. Although it may have been kept largely under wraps, it seems evangelicals and messianics are collaborating more than ever “ to build the Kingdom of God in Israel” (2)
Stephen Strang: CUFI Regional Director:
Strang publishes Pastor Hagee’s Books, is the founder of Charisma Magazine and Strang Communications – “a multi-media communications company focused on spreading the name and fame of Jesus throughout the world through the mass media.” Strang made TIME Magazine's list of "The 25 Most Most Influential Evangelicals in America"
He is perhaps the most problematic of CUFI’s regional directors. A simple rundown of a sampling of his activities and affiliations over the last few months should give any Jew reason for great concern. He promotes overt missionary activity, bolsters the messianic community in Israel, vilifies the Orthodox community, and fans the flames of anti-Semitism.
In March of this year, Stephen became a signatory on the widely publicized World Evangelical Alliance statement which called for both evangelicals and messianics to continue to target Jews for conversion. (3) (pictured below is an ad appearing in the New York Times and other major publications) 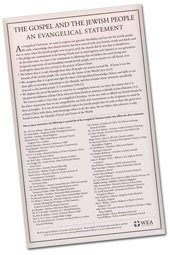 In April Charisma Magazine ran an article by its editor, Lee Grady, which reeks of classical anti-Semitism (4) Below is an excerpt:

In the days of Jesus, rabbis observed a myriad of extra rules that were not in Scripture. Their legalistic code focused on what they could and could not touch. These guys invented the original version of the holier-than-thou religion. They stayed away from women, children, dead bodies, lepers, beggars, sinners, blood, shellfish, pigs and—especially—people of other ethnic backgrounds. They didn’t want “unclean” gentiles to corrupt them.

The Pharisees, especially, were obsessed with hygiene. They had a rule for everything from how to wash dishes to how to stay ceremonially clean after walking in the streets. That’s why they got upset when they saw that Jesus’ disciples didn’t follow the standard Jewish hand-washing ritual.

They asked Jesus: “‘Why do your disciples not walk according to the tradition of the elders, but eat their bread with impure hands?’” You can almost hear their smug, nasal tone. Jesus’ reply was blunt. He called His inquisitors hypocrites; then He chastised them for “‘teaching as doctrines the precepts of men’” (Mark 7:5-7, NASB).

Also in April Strang lauched a campaign decrying persecution in Israel against messianic Jews, and appeared to implicate Orthodox Jews in a “terrorist attack against a Messianic Jewish family” …“there are also ultra-Orthodox groups like Yad L'Achim who are responsible for constantly harassing Christian believers in Israel… I hope you join me in writing letters of concern on behalf of Evangelical and Messianic believers in Israel and bombard Israeli officials from the Foreign Ministry, the Tourism Ministry, the Prime Minister's Office, and the Ministry of Justice” (5) 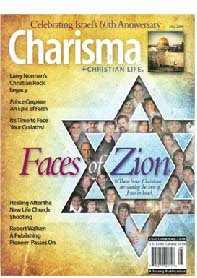 In June Strang wrote an article in Charisma Magazine which again implicates the Orthodox Jewish community in an attack on a messianic pastor’s son. Without any suspects or arrests, his article amounts to nothing short of an anti-Semitic blood libel.(7)
(Excerpt)
“However, some of the anti-missionaries have become so vicious that it appears they have resorted to violence...Messianic Judaism… is growing rapidly and is considered to be a threat by some Orthodox Jews. Harassment of all Christians in Israel is increasing, and Messianic believers are concerned that they may be facing a new round of persecution…we need to urge leaders in the Jewish community to express their outrage… My Israeli sources say the pattern is to let time pass and sweep the investigation under the rug because many Orthodox Jews despise all Christians, not only Messianic believers…”

Stephen Strang has been involved in promoting CUFI Nights to Honor Israel which utilize the services of the messianic organization, the Joseph Storehouse. (8)
But the messianic founders and operators of the Joseph Storehouse may not be as Israel-friendly as they seem. Like Strang, Barry and Bayta Segal are screaming bloody murder in their newsletters- with no evidence - and pointing the finger at the Orthodox Jewish community (9)
It should be noted that CUFI Directors Stephen Strang and Robert Stearns have been guest speakers and performers at the Segal’s messianic missionary shindig which takes place every Succot in Jerusalem (10)
To be fair it should be noted that Strang’s disdain for Orthodox Jews and his cries of messianic oppression go way back. In an article which appeared in Charisma Magazine in September 2002 Strang mixes praise for John Hagee with cries for his messianic brethren (he admits to supporting them financially, too) (11)
(Excerpt)
Equally as hard-hit as the Jews by the unrest in Israel are Messianic believers. Many of them are unemployed. Ministers such as Ari Sorko-Ram are working to raise money for them from Christian believers through a Web site called www.istandwithisrael.com.
The problem is that a Web site with a similar name collects money from evangelicals for many worthwhile causes. But that group also funnels money to Orthodox groups that often oppress Messianic believers.
Ari Sorko-Ram is the son-in-law of Christ for the Nations co-founder Freda Lindsay. I met with him and his wife, Shira, when I was in Israel several years ago and know how valuable and important their ministry, Maoz Israel, is. I have personally supported this ministry financially, as I urge you to do by visiting their Web site. It's important for Christians to stand with our Messianic brothers and sisters at this time.

MICHAEL LITTLE: CUFI Executive Board Member
Little is the President of the Christian Broadcasting Network (CBN). As noted earlier in the first part of this report, Michael Little continues to endorse the messianic missionary organization MaozIsrael. And MaozIsrael is currently on an anti-Semitic rampage in which they falsely accuse Orthodox Jews of terrorism and murder and being possessed by evil spirits (12)
(exerpt)
And when ultra-Orthodox Jews in Israel rail and blaspheme folowers of Yeshua, burn down the believers’ places of worship and ministry, and now attempt to kill believers, then they too have been possessed by these evil spirits.
CBN is offering plenty of air time and articles towards promoting messianic Judaism, making erroneous claims of church Persecution, and disparaging Orthodox Jews. The network has repeatedly, erroneously and maliciously linked unrelated incidents like the incineration of missionary material in the town of Or Yehuda to a small church fire which was most likely vandalism, and occured last year in Jerusalem, to an explosion in Ariel which as far as we know could have been anything from illegal Purim fireworks to an Arab terror attack. The only thing that has been proven is that Michael Little’s CBN network likes to set fires, fan flames, and create lies(13)

Robert Stearns: CUFI Regional Director
Stearns is the founder and executive director of Eagles' Wings Ministries. Stearns and Dr. Jack Hayford serve together as co-chairmen of "The Day of Prayer for the Peace of Jerusalem” The mass prayer mobilization represents “the largest coalition of leaders of influence in the Body of Christ focused upon prayer for Jerusalem”.
Robert and his friend Jack are heavily focused on a messianic Jewish (Christian) revival in Israel, and they sponsor major conventions that champion the cause of messianic Judaism. Stearns lectures and leads prayer serves at conferences entirely dedicated to the subject of messianic restoration in Israel.(14)
In August of 2007, three thousand delegates from the International Church of the Foursquare Gospel gathered in Jerusalem for a conference aimed at embracing local messianic s. Throughout the conference, early morning worship and prayer services were led by Robert Stearns, founder of Eagles Wings ministry. (15)
In June of 2

Young Israelis Praying at "The Call" 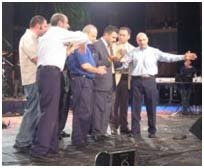 Messianic Jews and Arabs Praying Together
Jim Hutchins: CUFI Regional Director***
***I have a significant and distressing report on Hutchins, but when I checked the CUFI website on July 8, 2008, Hutchin’s name no longer appeared. I have received confirmation that James Hutchins is no longer a regional director of CUFI. My source was unable to say who "instigated the split".
So I will just offer a brief synopsis without citing sources at this time (those sources do appear in previous postings of mine).
Hutchins Is President of the Jerusalem Connection International. He graduated from Fuller Theological Seminary with a Doctor of Missionary (Multi/Cross-Cultural Studies). His dissertation was entitled, "A Case for Messianic Judaism." Jim sits on the board of the Cyrus Fund which is a project of the Jerusalem Connection. Although the Cyrus Fund websites don’t admit it, it does seem some missionaries affiliated with the Cyrus Fund are teaching the Gospel to Bnai Anusim via messianic churches - and getting those "converts" ready for aliyah. Also six out of the seven board members of the Cyrus Foundation are either active evangelical missionaries or messianic Jews. Rabbi Kravitz of Jews for Judaism has more to say on Hutchin's proselytizing to Jews…

In Conclusion:
First and foremost, the situation demands that Israel set up an accountable system to monitor our relationship with Christian groups. Counter-missionary legislation must be enacted, and our rabbinic leaders need to issue immediate and clear halachic guidelines which enable and empower us to protect and preserve our Jewish heritage.
Under the circumstances, it would be wise for the Diaspora and Israeli Jewish community to distance itself from CUFI until Hagee can get his house in order. I know that's a difficult and tall order to fill - especially in light of the outstanding and supportive statements and gestures emanating from that Christian body
I met with Hagee confidant and friend Rabbi Arye Scheinberg fourweeks ago at the home of Rabbi Simcha HaCohen Kook. I understand Rabbi Scheinberg had requested the meeting with Rav Kook in order to better understand certain positions the rabbinate has been taking. A Representative from the Jerusalem City Council and the director of a counter-missionary group were among those present at the meeting. Rabbi Scheinberg acknowledged the wealth of evidence and problems with certain CUFI directors, and assured me that Pastor Hagee was well aware of the situation with at least one of his main directors and publishers. I was told that Strang was “out” and that other changes were forthcoming. But other than the sudden removal of Jim Hutchins from the CUFI Regional Director section of the website, I have no indication that any action has been taken as a result of that meeting.
Sources:
(1) Haaretz, June 10, 2006 , Aliyah with a cat, a dog and Jesus
(2) http://www.cbn.com/CBNnews/344905.aspx
(3) http://www.worldevangelicals.org/news/view.htm?id=1732
(4) http://www.fireinmybones.com/Columns/043008.html
(5) http://www.strangreport.com/2008/04/silence-is-almost-deafening.html
(6) http://www.charismamag.com/display.php?id=17050
(7) http://www.charismamag.com/display.php?id=17205
(8) http://www.charismamag.com/display.php?id=13922
(9) http://www.sidroth.org/site/News2?abbr=art_&page=NewsArticle&id=7169&security=1043&news_iv_ctrl=-1
(10) http://www.succotcelebration.com/speakers.htm
(11) http://www.charismamag.com/display.php?id=6495
(12) http://www.israelenews.com/view.asp?ID=2354
(13) http://www.cbn.com/cbnnews/385992.aspx
(14) http://www.tikkunministries.org/newsletters/dj-jan07.asp
(15) http://www.israeltoday.co.il/default.aspx?tabid=134&view=item&idx=1501
(16) http://www.tikkunministries.org/newsletters/EdS-jun08.asp
Posted by ellen at July 13, 2008

Are there updates to this?
Thanks.

Yes, an updated and comprehensive report should be posted in the very near future.
In the meantime please check out a number of the pages and videos citing CUFI in or archives at
http://jewishisrael.ning.com/main/search/search?q=cufi

Yes, an updated and comprehensive report should be posted in the very near future.
In the meantime please check out a number of the pages and videos citing CUFI in our archives at
http://jewishisrael.ning.com/main/search/search?q=cufi