You may have noticed that I've adopted the favorite anti-Israel antisemitic term used against us for having Gd on our side, "disproportionate." Except for the fact that Gd protects us and causes potentially deadly missiles shot by Arab terrorists to miss causing more deaths of Arabs than Jews, the truth is that Jews suffer more from "disproportionate" policies here than Arabs.

I find it immoral and illogical and totally discriminatory that we Jews are forbidden by the Israeli police to pray to Gd in the holiest place on earth, the Temple Mount, Har HaBayit!

Also Arabs and others who shout out hateful violent antisemitic threats and curses and lies to Jews aren't arrested, while Jews who may possibly be involved with anti-Arab acts and philosophy are held without civil legal rights. Yes, I'm not exaggerating.


MK Zahalka to Jewish worshipers on Temple mount: “Get out of here, go home!”

MK Jamal Zahalka of the Joint List arrived in Jerusalem this morning (Tuesday), to participate in the Arab protest against the right of Jews to enter the Temple Mount. Zahalka approached the Jewish worshippers and the policemen at the site and shouted at them: “Get out of here! Go home! You have no place here! You are not wanted here!”

Yesterday when leaving the Kotel area, I noticed a group approaching with a Palestinian flag, but I couldn't catch a photo of it. Obviously it was a provocation, and I wonder if it was connected to Zahalka's group. I haven't seen any report of it. If you have, please add to the comments here, thanks. 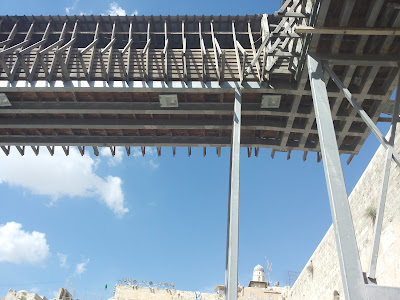 One nice thing I heard while saying my prayers at the Kotel was joyous Jewish song about ascending Har Habayit. It came from the upper passage as seen in the picture above. Apparently, a group of Jews was taking advantage of their approach to the Temple Mount for prayers they are forbidden once there. The women and children near me were all looking up from where the songs were sung with joyful admiring expressions. It somehow reminded me of the old Superman television show when people would stop, stare and point:

That was what went through my mind as I heard their joyous prayer-filled song. The more Jews who ascend the Temple Mount the closer and sooner we will get to having full religious rights and then full national rights on the holiest place in the world for Jews!!
Posted by Batya at September 30, 2015

Recently, HaRav Yitzchak Yosef, the Chief Rabbi of Israel said in a speech about this: “One of the rabbis even dared to argue. I told him ‘with all due respect how can you disagree with Rav Elyashiv, with Maran my father, the Steipler, Rav Shlomo Zalman Auerbach and the Gedolei Hador? We are talking about kores!”

The secular police seem to be serving HaShem in this case!

Yisroel Tzion, it is not forbidden by halacha to go to the Temple Mount. There is one small place on the Temple Mount which we aren't to go unless we are building a Beit Hamikdash. Until a couple of hundred years ago, it was the Temple Mount where Jews prayed, not the Kotel.
The Temple mount is enormous, and it's very easy to stay away from the Holy of Holies. There are respected rabbis of today who approve of ascending the Temple Mount especially to preserve its holiness instead of the Hillul Hashem there is today by the Muslims.