The Rock Throwing Arab Kid Should Have Been Arrested!

No doubt you know that I don't freak out easily. I'm perfectly fine tremping, that's hitchhiking, and I work with Arabs. So when I say that something made me nervous, you should listen. Today, when on my way home to Shiloh from Jerusalem, I saw something that disturbed me, yes, me, the relatively unflappable. Just before the turnoff to the Adam security road, I saw two young Arab kids with a bunch of sheep. One was much too busy (to amy taste) throwing rocks at the sheep with his back to us, as you can see here. 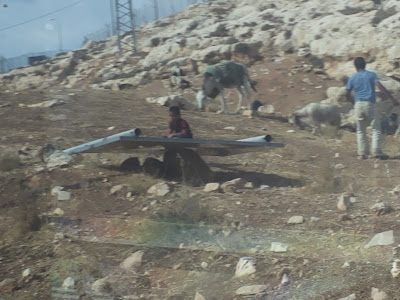 It wouldn't have taken much for him to turn around and lob one through a car window, Gd forbid. Maybe the nearby soldiers were waiting just for that, but I would have felt much more secure if as a preventative measure he had been arrested.

One of the things that bothered me was how he kept turning around to look at all of us, as if weighing his options to attack Jewish cars or not. On a personal note, I was perfectly safe in the bulletproof bus, but most everyone else was in a car, and for sure most cars did not have specially treated windows.

What do you think about this?
Posted by Batya at September 29, 2015

Batya, no doubt you have been reading my latest posts on "Beating Yishma'el at His Own Game" (thanks to Rav Yissocher Frand, shlit"a, for starting me off on this). Others should, too. that's why I'm linking them here, even though I"m on your blogroll; I think it's that important. I may be writing more on this topic, be"H, b"n.

Concerning "Beating Yishma'el at His Own Game"

Thanks so much. I hope more will read it.