No doubt that the crew was prepped to deny all and play innocent.  That way they have nothing to lose in shipping dangerous weapons to the Arab terrorists in Gaza, Syria, Sinai etc. And now everyone is claiming innocence and ignorance.


Both Iran and the terrorist groups which operate in Gaza denied on Wednesday that they had any connection to the Klos C, the ship that the IDF intercepted and which was carrying weapons for Gaza.
"We completely deny this report which is totally without foundation," AFP quoted an unnamed Iranian military official as having told state-run Iranian television's Arabic-language Al-Alam channel.
Hamas, the terror group which runs Gaza, also denied it had any connection to the ship.
“This was all made up in order to argue that we are terrorists and give justification for the continuation of the blockade,” Hamas spokesman Mushir Al-Masri told Channel 10 News.
“The whole world knows what the relationship between Iran and Hamas is today," he added.
Another Hamas spokesman, Taher Nunu, also denied that the group had any involvement with the ship, dismissing Israel’s claims as a “Zionist fabrication.”
"The Zionists’ story is a fabrication meant to justify the blockade on Gaza - as if there is a seaport and ships that enter it,” Nunu said. “Gaza is besieged and the ship was found in the Red Sea, thousands of miles away from Gaza. This is a lie of the Zionist occupation.” 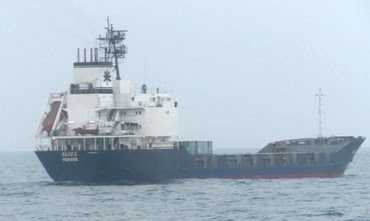 How can that be?  It's obvious that they are all lying.  And legally the captain and ship's owner are responsible for what's on board. Let's put the pressure there in addition to prosecuting in international courts and the United Nations Iran, Gaza etc.


"The  intercepted a ship early on Wednesday that  was using to smuggle dozens of long-range rockets to Gaza."

Nobody from its owner to top office holders to the lowliest crewmen should be immune from prosecution. Every single person associated with that ship must face their guilt and be tried and punished. If we don't do that we are just encouraging more such terrorist weapons filled cargo ships.
Posted by Batya at 8:45:00 AM

Yet another reason Israel should not draft the Hareidim. You do not know where to step on this twisty treacherous goat trail? The people who keep the lines humming with communication from and to Hashem can tell you exactly where the answers lie. Let your Lion off His leash, Judah. He will fight for you.

Sarah, I don't see the connection. If you want good Torah observant moral people in power, and you think that chareidim are, then you must support encouraging them to get involved with all aspects of Israeli life including the IDF.

"We will expose, and we shall fight them. And I’ll tell you the other thing: We shall beat them." ~ בנימין נתניהו

But still we should have jailed and tried and convicted everyone on the crew so that in the future captains and crews will carefully check their cargo and then refuse to sail.

I don't think that reality allows a ship's crew to unload and properly inspect every container.

It's a different story when the weapons are lowered directly into the hold and then covered over.

Sarah, you have a twisted, prejudiced view that Hashem has cut off communications with every Jew who does not define themselves as "Haredi".

BTW, are you even Jewish?

A certain percentage must br checked like we check for bugs and whoever sends must identify contents.

Batya, what you suggest (regarding responsibility to randomly check sealed shipping container) is not going to be adapted by any country. It certainly will not be adapted by the shippers themselves, unless you want to fund them.

They have it for drug inspections. Don't ship owners require labelling and limit explosives etc?

Batya, inspections are done by the authorities, not by the shipping companies.

I'm sure the containers were properly labeled for the cement bags the contained that were used to cover up the missiles.

The only thing I can think of which can resolve this problem is to stop ships in international waters and inspect them. Of course, this is an act of war or the closest thing to it.

If that's the case, we did what we needed to do.