Chaos in The Post-USSR

The news stations/channels are all talking about what's happening in the Ukraine.  Chaos in the various countries that were once the USSR should be expected, since the glue holding it all together was pretty brutal.  Over the past century plus, borders in that area have always been fluid, meaning changing.


Russia wresting control of Crimea from Ukraine
By Pavel Polityuk and Alissa de Carbonnel
KIEV/BALACLAVA, Ukraine - Russian President Vladimir Putin wrested control of the Ukrainian Black Sea region of Crimea from Kiev on Saturday citing a threat to Russian citizens and servicemen of the Russian Black Sea fleet based there 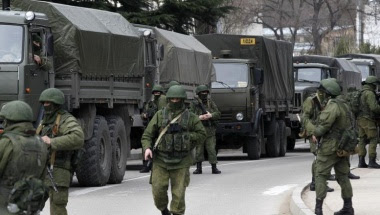 I wouldn't claim to be an expert, but there's one thing for sure.  History is very consistent in the fact that whenever there's this sort of chaos, Jews are in danger.


Ukraine Synagogue in Crimea Spray Painted With ‘Death to the Jews’JNS.org - A news website from Crimea, a Ukrainian region that is now the site of clashes between ethnic Russian residents and Ukrainians in the wake of the toppling of Ukraine’s former government, reported that a synagogue in the city of Simferopol was spray painted with anti-Semitic language.
The spray paint included Swastika symbols and the wording “death to the Jews,” said Anatoly Gendin, head of the Association of Jewish Organizations and Communities of Crimea, reported e-crimea.info. Although there is no direct evidence linking anti-Semitic incidents in Ukraine with the broader civil unrest in the country, Gendin pointed to the fact that since the Maidan protests started, Ukrainian life has gotten 30 percent more expensive and the Ukrainian Oschadbank stopped issuing pension payments to the elderly.
“When I look at this anti-Semitic writing, I understand that the provocateurs want to turn the attention of regular people to ‘those responsible for these negative changes.’ History tells us that those always to blame are—the Jews! What will happen later? I don’t know,” Gendin said, as translated from Russian by JNS.org.