Bogie WIMP Ya'alon! Another TKO for The USA Just a couple of days ago, Israelis and proud Jews all over the world reveled at the honesty that had come from Defense Minister Moshe Ya'alon when he told the truth about the Arab terrorists who are supposed to be our "peace" sic partners. Now here we are less than a week later, and he has already buckled and apologized.


Defense Minister Moshe Ya'alon found himself apologizing for the second time in recent weeks for harsh comments made about the US government.
In a phone conversation with US Secretary of Defense Chuck Hagel on Wednesday night, he said that his comments "were not intended to express opposition, criticism or offense to the United States," adding that maintaining strong ties with the United States is Israel's utmost priority.
Ya'alon expressed his appreciation for the close relationship Israel shares with the United States, and emphasized his full commitment to cooperation between the two nations.

What can I shout other than WIMP?

What kind of defense can a man like that administer?

Honestly, I hate to say it, but I'm not all that surprised. Many of you readers already know that I think of Prime Minister Binyamin Netanyahu's coalition as marionettes on the stage, all controlled very efficiently by tightly held strings. 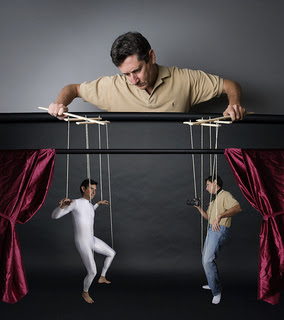 That's the deal that Bibi makes when he signs people into his governments. And that's why I don't consider being in the Israeli Government Cabinet as having real power. Bibi holds muzzle power over his cabinet and coalition. To be part of the Netanyahu government one must promise to be a team player and play only according to Bibi's rules. He's a strict enforcer and as unhappy as some of the coalition may be, nobody has the guts to walk out on him.

After each rebellious peep, there's a kowtowing apology and then silence.

None of them are willing to rock the boat aka give up their Volvo's*...

*Israeli slang for cabinet, ministerial perks. Israeli ministers and vice/assistant ministers get government cars/drivers, which were once Volvo's.
Posted by Batya at March 20, 2014

Bibi's gotta go! We need a PM who will change the rules of the game. Or else... we need Mashiach! Do we do our best to game the system (and if so... HOW), or do we stand on the side prophetically and pray for sea-change of the whole thing? Notice -- the new Governance Bill passed, meaning that the last attempt of Ben-Ari and Eldad to run separately is even less viable than before. I voted for them, though I did my due diligence in the Likud primary before that. I will vote for Feiglin for leader of the party again next time because there is no better alternative to Bibi. They are all puppets except Feiglin. Perhaps we should support an initiative for a National Primaries Law, requiring all parties which run for the Knesset to have primaries. That would perhaps cause a stir in the hareidi parties (some of which will have to unite) and push more people to become active members. The decisions DON'T happen at the general election. By the time the general election comes around, the majority of the candidates are either in or out. There is no way to dis-elect No. 10 on the Likud list short of an abused secretary or something similar, and that only if there is media. Media, the Brainwasher-general, don't get me started there!

Batya, you need to ad a pic of a jellyfish to your article.

The US ought to go pick on someone their own size (and strength). Bully, bully, bully.

All it says is that the Israeli government, including the Prime Minister, as commented on elsewhere, would like to tell the truth, but are constrained by international opinion. Whenever you hear this kind of headline, recognize that this is why they are "wimping out" rather than standing by their statements.

Pathetic. Yes, international preasure. But either the Tanach is true or false! Let's find out!

goyish, shy, yes, good points
sheldan, aparatchik, true leaders don't fear other countries.
Shiloh, they swear on the Bible; don't they?
a, we'd be a power if we would just say "no."

Then maybe Israel can't have a true leader, since prime ministers of all parties do the same thing. Very sad.

We must not give up, sheldan, it's just too important. A big problem is that our Misrad Hachutz, like the US State Dept is very left wing and always has been. When Begin was elected he could have cleaned it out and replace it, but he refused, thinking it "un-noble." It's full of political appointees who were turned into permanent govt employees.
They advise the Prime Minister, and their advice is bad.