Can Abbas and Fatah Really Make Peace With Israel?

Can Abbas and Fatah Really Make Peace With Israel?

Certainly not before ham is declared kosher...

Read the latest in the Palestinian Media Watch-PMW!


PA: "Palestine" replaces all of Israeland is "indivisible"
Fatah Facebook: "We educate our children... [so that] they will only agree to one rule, which cannot be added to, subtracted from, or calculated: that Palestine cannot be divided" 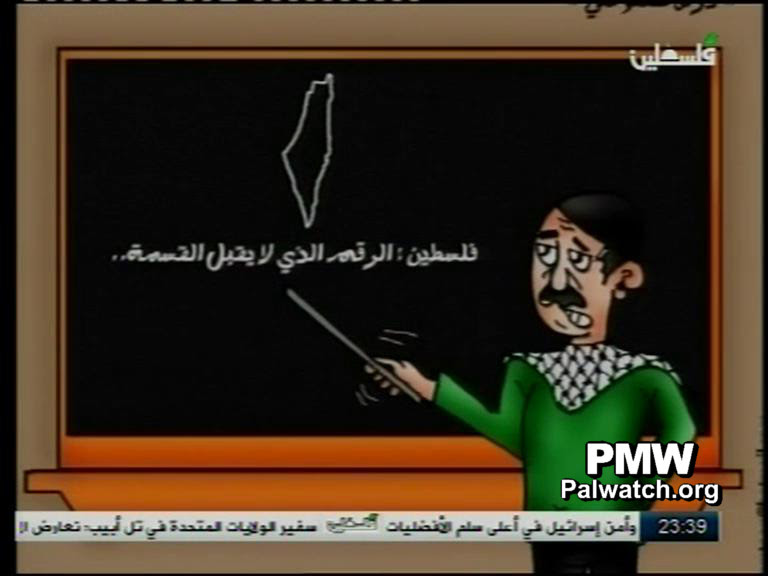 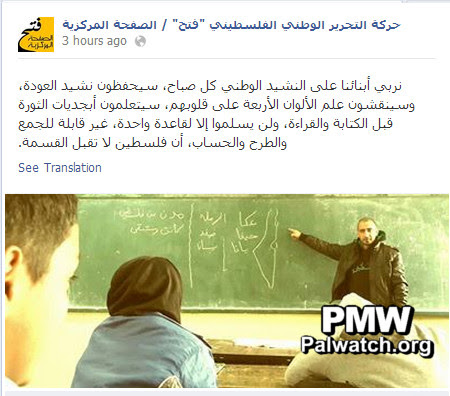 "We educate our children on the national anthem every morning. They will memorize the anthem of 'return'; they will engrave the four-colored [Palestinian] flag on their hearts; they will learn the foundations of the revolution before they learn to read and write; they will only agree to one rule, which cannot be added to, subtracted from, or calculated: that Palestine cannot be divided." [Facebook, "Fatah-The Main Page," March 5, 2014]

The text was accompanied by a photo of a teacher pointing to a map of "Palestine" replacing all of Israel drawn on the blackboard, with the explanatory text rejecting Israeli jurisdiction over Israeli cities: "Acre, Haifa, Jaffa, Ramle, Safed, Beit Shean, were and will remain Palestinian cities."

Fatah is not moderate! They are extreme, radical anti-Israel Arabs.

I so sincerely wish that the Israeli Government from Prime Minister Bibi Netanyahu on down would take the statements of the Fatah seriously. It's not like this is all secret. Another generation of Arabs is being raised to deny Israel's existance. Therefore according to simple logic, we can't have peace with them, and they do not want true peace with us.

We must stop trying to imagine, guess what Arab reactions will be to our peace proposals. If you read carefully, you'll see that Israeli politicians don't quote the Arabs.  They guess, imagine, think that the Arabs will react in peaceful ways to all the "deals" being proposed by the Americans and the Leftists. There are only a couple of sites where you can find the truth about the Arab plans for Israel. One is the PMW and the other is David Bedein's Behind the News in Israel. Here's an excerpt from a recent post on his site.


Arafat and the Jewish State: Setting the Record Straight

I highly suggest that you subscribe to these news sites.
Posted by Batya at March 21, 2014

As you yourself have pointed out, Israel's greatest problem isn't the Arabs.

Its Jewish stupidity - based on the naive belief that if only Jews are nicer to the Arabs, the Arabs will drop their hostility to them.

That is never going to happen. And there exists no circumstances under which the Arabs will ever accept Jewish national rights and Zionism.

Any on who thinks otherwise is living in a dream world.

We need self respect. There is another prisoner realease next week. What self respecting human or Nation would cower to releasing murderers of it's citizens. Until we respect ourselves, no one will fear us. The Arabs despise weakness and so do the goyim. They continue to brow beat us, we must stop being eternal victims and stand up to the world once and for all. Stand for justice and righteousness in this dark world. We must call a spade a spade and put an end to the created entity called the 'Palestinians'. Let the chips fall where they may at that point, either God is with us or He is not.