If There Was To Be A "Palestinian State," My Prediction

Now, I really want to make something very clear before I continue this post. I AM 100% IN EVERY POSSIBLE WAY OPPOSED TO THE ESTABLISHMENT OF A COUNTRY CALLED "PALESTINE!"

Besides the certainty that the existance of another Arab country here in the Jewish Holy Land would herald, cause, facilitate the destruction of the State of Israel, because that is the declared aim of the so-called "Palestinian nationalists," I am completely certain that something else that nobody wants to talk about will happen.

For the past three plus years I've been working in Yafiz, part of the Rami Levy business empire, in Sha'ar Binyamin.  I work with Arabs and "serve" Arabs as salesperson. I certainly have more daily contact with the local Arabs than most Israelis, including Leftists.  I know Arabs of all ages and incomes, including customers who work for international "help" organizations. Arabs talk to me and ask me very interesting questions. I'm telling you this so that you understand that I'm speaking from knowledge, not from ivory tower theories and wishful thinking.

For the first time in my working life in Israel, close to four decades, I had to pass a security review to get my job in Yafiz. Everyone who works for Rami Levy or Yafiz must go through the same thing, and that of course includes the Arabs. To make it easier for non-Israelis to pass the security investigations, it ends up that most of the Arabs hired are related to those Arabs already working in the company. Getting these minimum wage jobs in Rami Levy is a great job for most of the Arabs, because the employment conditions are much worse when out of Israeli government labor laws.

Over a year ago, an Arab woman who was enjoying the fact that she could practice her English with me told me that she's an English Teacher, and when I replied that actually I am, too, she said that I could make "lots of money teaching English in Jenin or Nablus, ns4-5,000 shekels. Besides the safety factor, I was shocked, because in Israel that's minimum wage; teachers make much more. Then a couple of weeks ago, an Arab man told me that he owns a clothing store in his village and wanted to know how much I make. I didn't tell him, but he told me that he pays ns700. I asked for how much time, and he answered "a month." Nobody can live on that. 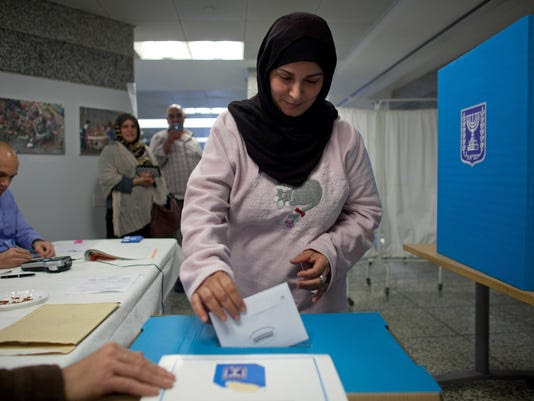 Don't forget that just a couple of months ago when the idea of a "land swap" as part of a "peace agreement" was suggested that would transfer Israeli Arab areas to "Palestinian" rule, the Israeli Arabs were outraged and refused it, because they do not want to be under Arab rule. They, even MK Tibi, want to stay Israeli!

I have a very strong suspicion that if, G-d forbid, an Arab aka Palestinian State was to be established every single Arab who could would move to Israel!
Posted by Batya at March 25, 2014

actually, something similar has already happened, before Israel became a state. that's where the so-called "palestinian" arabs came from to begin with.

Leah, yes, very true.
without Zionism this land would be very empty.