The VOTE! The Israeli System is Good 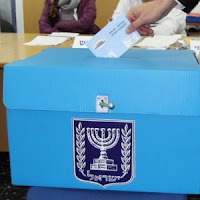 In just a few hours, less than twelve 12, the polling stations will be open in Israel for Knesset Elections.  We must choose from the wide variety of mostly boring and repetitive, if not rude and insulting political parties.  Each has chosen, whether through a committee of sorts or primaries a list of people that party hopes to send to the Knesset to represent its priority or priorities.


Considering that I've been voting in Israeli Elections since the Elections of 1973, which took place just over 39 years ago, I consider the system rather normal.  I must admit that this is the only system I've voted in, outside of student councils and youth movements of my youth and our local Shiloh elections, which I keep being appointed to run, or at least be on the committee.

Every electoral system has its problems and unique ways of distorting the essence of democracy.  Unlike most immigrants from the United States, I don't think the system there is perfect.  It has its faults, too.  The best thing about the American Government is its system of "checks and balances" which is supposed to prevent any one of the three governmental authorities, executive, justice and legislature, from dominating the other two.

There are two inherent weaknesses in the American voting system for the President, executive and also the legislature, Congress and Senate.
Israel, as the Jewish Nation is a country of varied opinions.  We need all of those, or at least most of them, in the Knesset, our legislature.  And in Israel, "winning" the elections does not mean that the party received more than 50% of the vote, sixty-one MKs or more.  A party leader must be a good enough political leader to convince other parties to join him/her to form a coalition government.

Let's pray that democracy and our ordinary Israeli citizens don't let us down tomorrow.
Posted by Batya at 9:57:00 PM