In a truly democratic and liberal, with a small "L" country, all citizens are treated the same under the laws of the land.  Shouldn't that be the case in Israel, too?

Nu, is it?  No, it isn't.  In Arab towns and cities certain behaviors are allowed that would get Jews into jail.

The only political party that isn't afraid to complain about this terrible and dangerous situation is Otzma LeYisrael, Strength to Israel Party.  And what does our hypocritical extreme Left media and most public leaders and politicians do when the Otzma  leaders, MKs Dr. Arieh Eldad and Michael Ben-Ari, decide to protest the situation?  They condemn Otzma and condone the dangerous to democracy and security situation.

The Otzma leaders and top Knesset candidates led a visit in the Arab town of  Musmus yesterday. 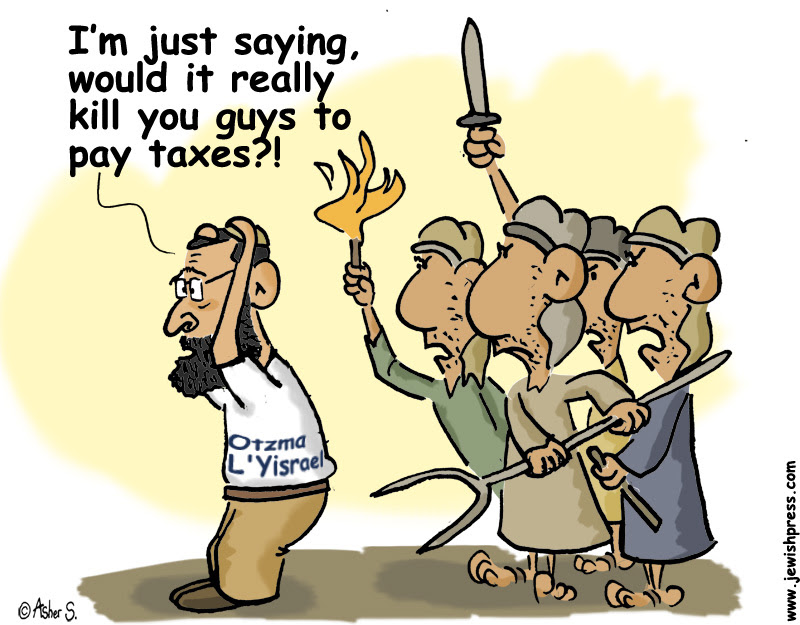 I really don't understand how peace-loving sic Leftists can accept a situation in which Jewish Israelis are persona non grata, life endangered, if they go to Arab neighborhoods, villages and cities here in sovereign Israel.

If an ordinary Israeli Jew is neither safe nor welcome to walk, shop etc in an Israeli Arab village, how do those Leftists and Centrists and many who call themselves patriotic Right think we can have a true and lasting peace with the Arab terrorists who aren't Israeli citizens?  Food for thought...

﻿﻿ Power for Israel MKs Michael Ben Ari (R) and Aryeh Eldad (RC) with party candidates Baruch Marzel (LC) and Aryeh King (L) under their campaign slogan "There are no rights, without duties."

And to remind you, it is the epitome of true democracy, small D, when all citizens are equal under the law of the land.  That is the meaning of Otzma LeYisrael's election slogan, "There are no rights, without duties"  the same slogan that has been labeled "immoral" by the Leftist judges of morality  here in Israel.

If you really believe that all citizens should be treated the same, then the only political party running for Knesset that promotes such a policy is Otzma LeYisrael נץ.
Posted by Batya at 5:36:00 AM

>> all citizens should be treated the same, then the only political party running for Knesset that promotes such a policy


Not true. Otzma still defends the idea that Peter Beinart has more right to make attain automatic citizenship in Israel than does a sabra, ethnic-Hebrew kid in the Tzankhanim of (former SLA) Maronite-Christian parentage. Otzma wants to hand the keys of the Population Registry to the Rebbinate. I will support Otzma, but not that policy. I will fight to (for example) establish billets for Notzri, Druzi, & Cherkassi Chaplains in the IDF. I am putting cash money into that effort.

Nothing will change without a new electoral system. I believe feiglin also stressed the idea in his platform. The leaders are only good if they represent and r responsible to their voting constituency rather than their own interests to hang on to power. Tonight I will attend the speaker engagement in Jerusalem. My first Israeli political event-got here for all the excitement. I even am staying right in sight of e1-how lucky can a girl from Irvine ?:-) 5026 brocsi
5026 brocsi

Alan, Israel is the Jewish country in the Jewish Land, and we don't owe citizenship to illegals and their children.
Deborah, change for the sake of change won't make things better. Have you ever heard of gerrymandering?

Batya,
Nu, so don't make gerrymandering legal.
The Torah says we are supposed to have 12 districts, and the people of each district should choose their leaders.

a, please don't be so naive. It just doesn't work like that. The United States practices gerrymandering, and in Israel it would only be worse.

"a, please don't be so naive. It just doesn't work like that. The United States practices gerrymandering, and in Israel it would only be worse."

The United States HAS to practice gerrymandering.. it's in the laws. Because in the US each district has to represent X number of people or Y percentage. This means every census you have to re-create the districts.

In Israel, it's simple to make geographic borders static and set in stone by law. We already have borders described in Tanach for just that purpose. The Israel election commitee, has 15 districts for collecting ballots allready as well. Those are defined by geography and have not been redistricted since 67.

Believe me that Israel would bring gerrymandering to new record distortions a million times worse than anything ever seen before.
The police and court must be ordered by the government to enforce the laws all over the country to all citizens of all religions, and non-citizens must obey regulatios, too.
What's so difficult if it's considered a priority, which it isn't now.