The Day After Israeli Elections, 2013, Now The Fun Really Begins

Contrary to post-Election days in most parts of the world, things only get more interesting now that the votes have been counted.  In the United States, once the votes are counted you know who your President is and he takes a couple of weeks to announce his cabinet, while the looser slinks away.

Now, although we know which parties passed the threshold and which didn't and how many, give or take until the final adjustments after redistributing wasted votes, how many seats exactly each party will get in the Knesset, we must wait a couple of weeks or more to know who the Prime Minister of Israel will be and which parties will be in his coalition with which ministries.  Oops, sorry for that winding, run-on sentence.

For a lover of politics like me, this really is the fun time.

The Likud-Yisrael Beitenu party "won," since it got the most votes and will have the most seats.


Prime Minister Binyamin Netanyahu said that he sees many partners to share his goals with him, as he delivered a speech following the release of exit polls on Tuesday night. Yesh Atid leader Yair Lapid spoke simultaneously, causing Israeli news channels to broadcast both speeches through a split screen. 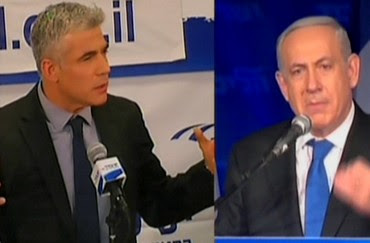 Since the "new man on the block" generally does better than the veterans here in Israel, so since this year's elections had two, Lapid and NRP's Bennett, no surprise that they both did relatively well. 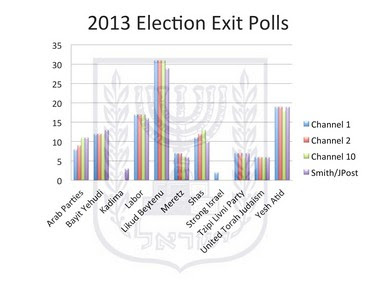 Now we'll see how good, meaning skilled and creative a politician Binyamin Netanyahu really is.  And we'll see which types of poker players Yair Lapid and Naftali Bennett really are.  They are the keys to a strong stable coalition.

And another bit of suspense or food for betters, is whether or not NRP-Bayit Yehudi leader Naftali Bennett will be able to keep his more ideological MK's in line with whatever coalition agreement he makes.  He has made it clear that he wants his Volvo (not for the money, he can afford a better car) his cabinet portfolio.  That means that he'll have to stay in the Center of the political spectrum.  That's how I understood the statement Arutz 7 translated a bit differently:

“Something new is beginning. Religious Zionism is back on center stage.”


There probably hasn't been as high a percentage of first-time Knesset Members since the early days of the State of Israel.

So, no doubt, no matter which party you support, constructing the new coalition government will be an interesting and bumpy ride.  Stay tuned...
Posted by Batya at January 23, 2013