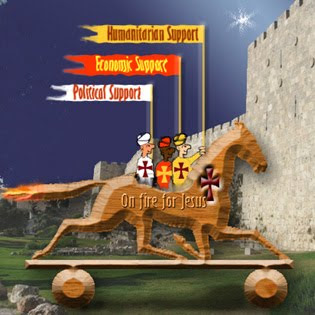 This report is a continuation of Jewish Israel's post-Carmel fire coverage, regarding major Jewish philanthropic and state institutions which are actively engaged in ventures with the evangelizing messianic community.

We fill you in on recent developments, take a look at JNF's partnership with GOD-TV, and expose some disturbing relationships State of Israel Bonds has with missionary entities...more

Christian Newswire is reporting that the film, Jerusalem Countdown, adapted from Pastor John Hagee's book of the same name, is scheduled for release this fall. The film was produced by the Christian film company Pure Flix Cinema in conjunction with John Hagee Ministries.

From what we can gather from the trailer, this is a high-budget, action-packed production about rapture, terror and romance. The all-star cast includes Stacy Keech playing the role of "a converted Israeli Mossad Agent"...more

This report is a continuation of the website 'Jewish Israel's' obsessive hatred and mis-information against Messianic Jews and Gentile believers in the Jewish messiah Yeshua.

Amerisrael, there is certainly nothing for Jews to like about messyanics like yourself spiritually corrupting the Jewish Nation's homeland with you pagan idol worship of a dead Jew on a stick mangod deity.

So, hate from the Jewish people is what you deserve. If you'll read our Tanach carefully (something you obviously have never done), you'll find that the hate is well deserved and Hashem definitely wants us Jews not to stand by and let your ilk infest our country.

Misinformation? Not a drop. Jewish Israel's simply reporting the facts, which unfortunately most Jews still don't know or refuse to acknowledge.

As for the bastard baby jesus you drool over, he is nobody's messiah. Worse, the proclamations of his "return" are one big joke.

Pity you for sucking up this 2000 year old mythological gobbledygook.

Addendum to my previous comment: my comment assumed that there actually was a character named jesus on which the NT bases its fables on. I did not intend to imply that as a fact.

There are many reasons to assume that there never was a jesus. See The jesus Puzzle.

Amerisrael,
The folks behind the Jewish Israel website neither hate nor mis-inform. We're just doing what we can to keep Israel Jewish.

What is apparent, however, is that you hate Jewish Israel.