Defense Minister Ehud Barak has joined the chorus of foreign and Israeli politicians and media pushing Prime Minister Binyamin Netanyahu to launch a fresh initiative to end the stalemate in the peace process with the Palestinians. Monday, March 7, Barak told a radio interviewer that in his view Palestinian independence and a peace accord would not run counter to Israel's primary security interests and urged him to publish a new peace plan right now. (Source)
Apparently this has 'inspired' the following mass e-mail response from CY Rabinovich, a CPA from Ramat Gan who happens to head the Matteh Yehudi Leumi [National Jewish Staff]. His e-mailings, usually consisting of a one-page Word file [in Hebrew], can be obtained here. Below is my translation of his latest piece.

An Open Letter to Israeli Prime Minister Benjamin Netanyahu
I am Chaim Yoavi Rabinovich, a simple citizen, resident of the settlement of Ramat Gan. I am a member of the Likud (Herut-Machal) since 1965 (yes, 45 years). I head the "National Jewish Staff" and for years I've been sending out two letters a week over the Internet, reaching approximately 18,000 households in the first round, and several thousand in the second. Since every household has more than one reader, the letters reach some 30,000 civilians each week, about half of whom are members of the Likud.
I put in a lot of work toward your election as Chairman of the Likud, because I thought that you were the only one in the National Camp who could wrest power away from the corrupt Kadima Party. I worked in many Knesset elections to get votes for the Likud, all in order to oust the lunatic left from power. I have no political ambitions: I'm not looking for a living, a job or any other benefit. My activities are designed solely to leave my children and grandchildren a flourishing Jewish State. All of those thousands of people that I convinced at the time to vote for the Likud and Netanyahu, have come to me with justified complaints, and I have nothing to answer them. They voted for Likud and received Meretz.
In my humble opinion, your declaration at Bar-Ilan, in which you agreed to "two states, for two peoples," was a terrible political error, because the "Palestinian" country that you established will certainly be a front for Iran - in the very heart of the Jewish State. Moreover, in the Middle East, one does not give free gifts. You made unilateral concessions, without any compensation from the Arab side. If you would have declared that you are willing to have two countries, only if the other party agrees to recognize Israel as the National Homeland of the Jewish People, I would not have agreed with you, but maybe I would have understood your position and deliberation. But to give up a cardinal policy position of principle, with nothing in exchange from the Arab side, makes no sense! 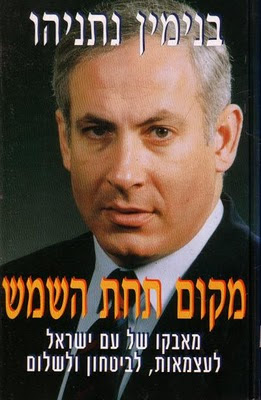 I have no doubt that if you read the book, "A Place in the Sun [Makom Tachat HaShemesh]," you would probably have avoided this irreversible step. A step explained by your confidants at the time as a tactical one, has now turned into a strategic path, which will unfortunately end up very bad for our People and our Country.
The pogrom executed by violent police on Chavat Gilad [Farm] under Barak's orders, was the last straw. 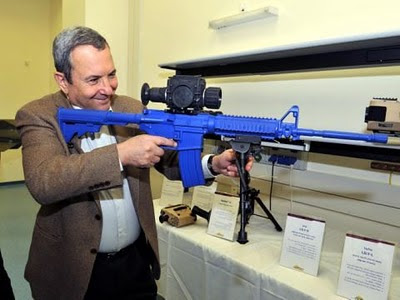 • Ehud Barak abuses the Jews of Judea and Samaria for years - and you are silent!
• The government prosecution abuses the Jews of Judea and Samaria - and you are silent!
• Ehud Barak sends 1,000 violent, masked police officers to Chavat Gilad - and you are silent!
• Strong-arm riot police aim their rifle barrels at Jews - and you are silent!
• The Police spokesman knowingly lies and claims that they shot paintballs - and you are silent!
• Magav and Yassam - Police Special Units - promote a pogrom at Gilad Farm by firing on Jews - and you are silent!
• The Minister of Police tells lies in the Knesset - and you are silent!
And in the spirit of the Book of Esther, I tell you: "If you are utterly silent at this time, relief for the Jews will come from another place, and you and your government and the country's National Camp will be passed along to a better person."
You act like there's no tomorrow, as if you are planning to end your political career after this term. If this is indeed so, I can understand your steps. But if you consider yourself a candidate for another term, it is difficult to understand the disengagement from your electorate in the Likud and the country.
In the Likud of today, there are some 130,000 registered voters. Of these, some 30,000 have specific jobs for this or that activist. About 20,000 are members who received some personal benefit, and ask themselves every day, "What did I get today by being a member of the ruling party?" And there are another 80,000 members, who want that the "National Camp" should rule, and not a leftist government. They extend their hand, to give and not to take. They will not repeat the error at the polls of voting for a National leader, and receiving a leftist chairman.
Mr. Prime Minister, you must choose between support of Barak and the support of 80,000 members who comprise the nucleus of the Likud, and another two million Jews, who share a National view for the People of Israel. My dear Mr. Netanyahu, you must choose: Barak or us! If you chose that 'genius' [Hebrew, gaon – also means 'lord'] (you should check the sources of his wealth) from Akirov Towers, forget us.
Mr. Prime Minister, if you plan to run the next election, as number two on the Atzmaut [Independence] Party's list, you may view this letter as void.
Sincerely,
Chaim Yoavi Rabinowitz, CPA - National Jewish Staff [HaMatteh Yehudi Leumi]
Posted by yitz at March 08, 2011

Its a nice letter, but every prime minister in the last 20 years has tried to give away our land behind our backs and against the law and has only been prevented by Hashem hardening the pali's hearts. This is a continual problem and won't go away until we can have a government that is held to our will, including a bagatz that rules wisely not internationally.

We will need to break the vassal state relationship that is now in place with the US also. We have been warned many times about relying on the nations rather than Hashem. Its time to place our trust in Hashem and move forward.

Yitz, thanks for posting.

Yonatan, I agree with you, but I think that Rabinovich's views are important to be presented.

Batya -- thanks for the opportunity. What's happening in Shiloh? Arutz-7 reported this:

ARABS ATTACK NEAR SHILO, JEW SUFFERS HEAD WOUND
Arabs stormed the area of Jewish neighborhoods Alei Ayin and Esh Kodesh, near Shilo, this afternoon. One Jew has been treated for a head wound after a rock hit him. IDF forces were said to be on their way to the scene of the clash, after the Jews reported that they were “in trouble.” Dozens of Arabs arrived in the afternoon hours and threw rocks at the Jews there. Alei Ayin and Esh Kodesh are two start-up neighborhoods adjacent to Shilo, in eastern Binyamin, north of Jerusalem. Together with Achiya and Adei Ad, they line the road leading from Shilo and Highway 60 to the Jordan Valley. Two months ago, hundreds of Arab similarly stormed the area of Alei Ayin, just a day after homes there were destroyed by Israeli security forces.