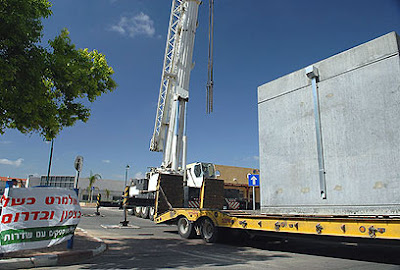 Pre-fab bomb/rocket shelters have been brought to Sderot. They've been placed in streets, so people can run in when the rockets red glare are falling.

And what if they can't run?

One of the latest victims is a handicapped youngster, who died of his wounds, but the government isn't willing to give the standard compensation to the family. Apparently, in the "excitement" of the kassam attack which injured a group of handicapped youngsters, nobody filled out the correct forms.

I'm always glad to see what I've been writing in the news, when others say the same thing. 'Reinforcement won't protect citizens'

Email ThisBlogThis!Share to TwitterShare to FacebookShare to Pinterest
Labels: Sderot