The US Frees Money to Terrorists 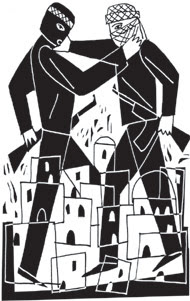 As a pragmatist, I have no problems recognizing that there are different laws for different people.

Jews and Israelis, even more so, are held to "standards" and "moralities" no other nation would tolerate. There is no historical precedent for the demands the world, the Left and the media make on Israel.

And at the same time, Arabs, especially the Pseudisitians aren't restricted by any normal standards of decency, behavior or morality.
The United States, under the enthusiastic pressure of its Secretary of State, the Ms Rice, has released tens of millions of dollars for the corrupt and terrorist administration of Mahmoud Abbas and his new Fatah-led emergency government.

“We are going to support President Abbas and what he wants to do,” Secretary of State Condoleezza Rice said in announcing the change in policy. She said the United States would work to “restructure” and unfreeze $86 million in aid that was originally set out to help Mr. Abbas build up his security forces. It was frozen because Hamas would not renounce violence, was considered a terrorist group and did not believe Israel had a right to exist. (for complete article click here)

Honestly, is really Fatah any better than Hamas? No, and I'm not the only one to say so. Read what Fouad Ajami has to say.

It is idle to think that Gaza could be written off as a Hamas dominion while Fatah held its own in the towns of the West Bank. The abdication and the anarchy have damaged both Palestinian realms. Nablus in the West Bank is no more amenable to reason than is Gaza; the writ of the pitiless preachers and gunmen is the norm in both places. (for complete article click here)

I wish the world would be willing to admit the truth. It would be safer for all.
Posted by Batya at June 20, 2007