They Really Want to Destroy Us

On the Jewish Calendar, the 40th anniversary of the Six Days War was a few weeks ago, but on the Christian Calendar it's now.

People of my generation and older have very clear and distinct memories of it and the horribly tense and frightening month before. The Arab countries were very proudly and clearly stating that they wanted Israel destroyed and the Jews thrown into the sea to drown. Pharaoh had failed at it thousands of years before when G-d opened the sea and the Children of Israel marched safely through. It closed up on the Egyptians, and they drowned.

The United Nations cooperated with all of the Arab requests and hastily withdrew its troops to facilitate the Arab war aim. The United States stood by passively. Not a single country offered aid or threatened serious sanctions against the Arab threats and plans.

At a press conference on May 28, Egyptian president Gamel Abdel Nasser said, "The existence of Israel is in itself an aggression… We will not accept any…coexistence with Israel... Today the issue is not the establishment of peace between the Arab states and Israel… The war with Israel is in effect since 1948."

On May 31 the Egyptian newspaper Al Akhbar reported, "Under the terms of the military agreement signed with Jordan, Jordanian artillery, coordinated with the forces of Egypt and Syria, is in a position to cut Israel in two at Kalkilya, where Israeli territory between the Jordan armistice line and the Mediterranean Sea is only 12 kilometers wide."

On June 1, Ahmed Shukairy, the PLO representative in Jordanian Jerusalem, responded as follows when asked what would happen to Israelis if there was a war: "Those who survive will remain in Palestine. I estimate that none of them will survive." for complete article, click this

Remember that this was just over twenty years after Nazi Germany was defeated and skeletal Jewish survivors were paraded on newsreels as the warm-up for post-war comedies. The United States had joined the war against Germany to save Britain and protect its own interests, not to stop the murder of Jews. Six million Jews had been murdered by the time the war was over.

Too many Israelis insist on believing that they're invincible and that the Arabs haven't really changed since the miraculously easy victory of 1967. That's the tragic flaw of Israel's Left Wing, which, contrary to the standard political labels, is truly reactionary, worshipping a past, which had a precarious, at best, security. The past they worship is the early days of the State of Israel, the time of the tzena, rationing, financial deprivation, frequent terrorism and sniper attacks on innocent Jewish civilians.

Instead of welcoming the Six Days War victory, the left-wing, and the psychological illness has spread to the "middle," all we hear from the media and most politicians is that it's "evil to rule over others." Shtuyot, as we say in Hebrew. That's not true at all. What's evil is the attempt to destroy a nation, and the Arabs still want us all dead, just like the Nazis did. The Nazis wanted Germany, and all of Europe, Judenrein, clean of Jews, and that's what the Arabs want for Eretz Yisrael, the Land of Israel. And... that's what the UN, the US and even some Jews want for Eretz Yisrael.

Why can't we Jews live in our HISTORIC HOMELAND? I'd like a good answer. Honestly, I'm sick and tired of hearing that I can't live in my home. There's no reason why I shouldn't be able to live in Shiloh, Israel. Why not? Would I be thrown out of Shiloh, Tennessee?

Remember; instead of being destroyed in 1967, Israel was victorious and liberated historical Jewish Land. There's nothing wrong with that. And that land must stay in our possession for the use and benefit of Jews.

We don't have to be sorry for winning and surviving. 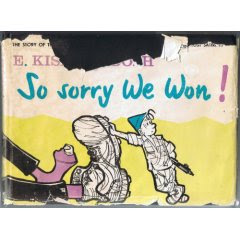 Since the expulsion from Gush Katif the Muslim world and a many Western 'intellectuals' are again openly calling for the destruction of Israel.
It goes basically like this:
Until 1948, when there was no state of Israel and no refugees, they schemed to throw the Jews into the sea. In 1948 their scheme was foiled and thousands ran away to Arab lands (many of them who had been in Israel as economic migrants for only a few years).
From 1948 to 1967, when there were no ‘territories’, they called to destroy the state of Israel. In 1967 their scheme was foiled, and they lost much territory (which rightfully belongs to the Jews anyway).
From 1967 to 2005, they publicly said “we only want the ‘territories’ back” and, after a failed attempt to regain the territories by force in 1973, they duped the faithless Israeli leadership into all sorts of fake-peace agreements.
In 2005 the faithless Israeli leadership showed the world by an orgy of expulsion and destruction that it is prepared to turn the clock back, and the Arabs (and the rest of the Muslim world) realized for the first time that the clock can indeed be turned back – so they decided to finish off what Ariel Sharon has started, i.e. until the blue line of the Mediterranean coast.
A new leadership must arise to turn the clock forward and not back, to eliminate the terrorist state, resettle Gush Katif, and inject a lot of Jewish values into the body politic. And this leadership is not Bibi; but maybe Moshe Feiglin (if he leaves the Likud) or Baruch Marzel.

good points
thanks for commenting