no way that's the real thing

This picture appears in the Jerusalem Post illustrating an article, tsk-tsking about building in the yishuvim. 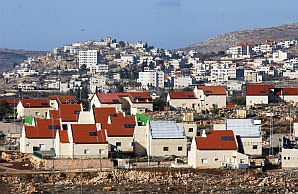 The caption under it says:

Now, I know Ofra well. It is not next to Ramallah, not even close. Psagot is next to Ramalla, and Beit El is to the northeast of it, but Ofra is much further northeast. That photo is doctored or taken at such a distorted angle, that it bears no resemblance to the truth.

There are a few small Arab houses directly across the road from Ofra. The larger buildings are much, much further away. I'll have to try to photograph them. The picture is a master of distortion or just a montage.

Besides that, why can't we build? The Arabs are building. Look at those brand new buildings!

The resolution is too low to see if we have a case of "fauxtography" here. Another possibility is that the settlement is Psagot and not Ofra.

I wonder if there are any jblogger in Ofra, who can check.

It looks to me like it might be Ofra, standing on the eastern edge, looking west. The Arab encampment in the background is probably Ein Yabrud.

One of the things I've noticed is that, because of the hilltops and steep valleys, it is possible on a clear day to see two towns on separate hilltops and think they are the same place, even though they are, in actuality, separated by several kilometers. I stand on my porch here in Pisgat Ze'ev and see Hizma with Adom directly behind it, and sometimes it looks like they are in exactly the same spot, even though they are actually separated by a valley.

As far as "close," well, that is, of course, a relative term.

Today when I got to Ofra I kept looking across the road to see if anything resembled the picture. it didn't.