When it comes to Olympics medals, many athletes are willing to risk their health by taking drugs to break records and win, especially in the sprints, which need such powerful muscles and time is so short. Professional athletes run for medals, fame and money, but residents of the Israeli south are running for their lives!

Israelis in the south aren't chasing fame and fortune; they're running to safety.

A sprint in Netivot and other southern Israel locations is not a game.  And the finish line doesn't promise a medal nor a world record.  The runners don't even know where to run to in many situations, because there's no way to predict exactly where the bomb, deadly missile will explode.

More voices from the south:


"I am so tense. We had a siren and rocket at 7 something this morning. In Netivot my
daughters (who are both scared by the whole situation, and one is expecting) didn't
have to teach as their schools are partly made up of caravans. I teach at the edge of Netivot. A LOT of students showed up so I taught literature (as planned but we lack migun*. (The building of a huge 'mamad**' is continuing but not yet completed.) So I was on pins and needles-- if there is a siren, it's under the desk with pupils. I've done it before with hysterical pupils and it ain't fun!

....got home at 2.15.Then 2.40 - another siren and BOOM. I just thank G-d I wasn't at school anymore, where they DEFINITELY heard it and went bonkers!! My hubby and I stayed home during Cast Lead (babysat for our building,) but with married kids who ARE terrified and grandkiddies, I am feeling the pressure build up as I DIDN'T then. And see no end in sight. And have no idea how - and -  live with even worse tension day in and out all year long."
"As I was walking my dogs, I just saw fireworks: Iron Dome shooting down two rockets. Fireworks, but the real deal. Would have been beautiful - if it weren't so ominous and frightening."
"Morning has arrived. Checking updates on the newspapers and Facebook sites.I want to have a shower, but am certain that as soon as I am under the water there will be a Red Alert. I am supposed to go to Tel Aviv to work but concerned about the drive which has me hugging the Gaza Strip (it takes me about an hour to drive out of missile range, and when you are driving outside the cities you don't even hear alerts or sirens. I want to go to do my medical clowning after my meetings, but that would mean driving back home after dark- an even scarier prospect in this war-torn situation . I am truly held prisoner by my fears through living in this area . And I am sure I am not alone. Life in the shadows of the rockets. Life on the Gaza border. Just thought you should know."
"So this is the deal in our house today: schools in Ashkelon are open (after all we need to keep to our routine), but this time I’m not sending my girls to school. I’ve learned that every time there is a rocket attack on Ashkelon only about 5% of the kids go to school. Most Israeli parents want their children to feel that they are safe – and who can blame them, right? They don’t learn anything that day, and whatever they do, they repeat when the whole class is back. My girls find it creepy to be in a nearly empty school, and most of the kids that do come leave in the middle of the day. And also of course there is a fear factor – they know that if there is a siren while they are at school that they have nowhere safe to go!
Dozens of rockets and mortar have been shot into southern Israel yesterday and this morning. I really hope that we can put a stop to this once and for all!"
"Ok, that's it. Everyone is now sleeping downstairs besides -, - & I. When (not if..) there will be a siren all we have to do is scoop up - & run.
Today ,during the time that - was on the school bus on the way home there was a siren. The driver didn't have Radio Darom on, the windows were closed and until they made their first stop and were met by hysterical parents - no one knew. That could of ended in a tragedy. I am dealing with it."

There's nothing I can add to this.  It's amazing how people find the energy to continue.  Most of Israel is totally unaffected by the attacks.  It's very much like it used to be when northern Israel was being attacked by Syria before the 1967 Six Days War.  The Syrians had used the Golan Heights as their base to attack, bomb and terrorize parts of northern Israel, especially the Gallilee (Hula Valley, Hazor.)

And northwestern Israel, such as Kiryat Shmoneh, has still been in danger and attacked by Lebanon. 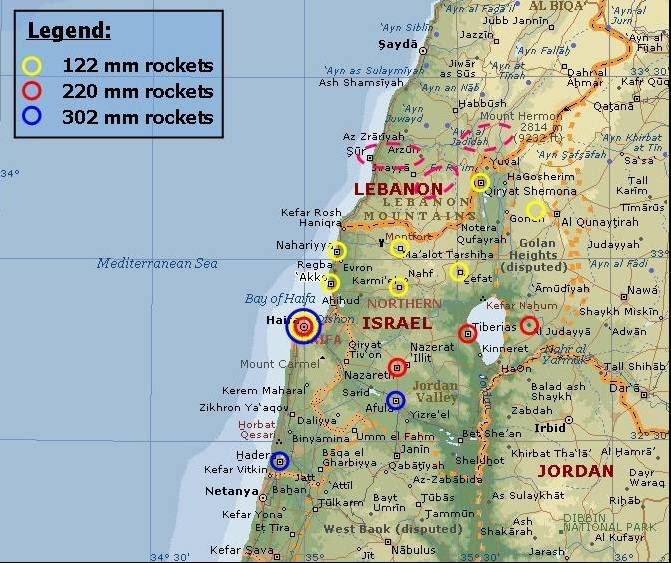 Most of the country ignored that, too.  We must consider an attack on Netivot to be an attack on Tel Aviv and react appropriately.