And Meanwhile, Back at The Ranch... Southern Israeli Jews are Still Being Attacked!

The world, including the Israeli media, politicians etc have their minds, attentions on one thing today:

My friend Miriam blogs from the Israeli south, so she has a much closer perspective than I do.


Israelis Under Attack! Weapons of Choice: Missiles, Firebombs, Boulders and More....
The purpose of the posting is to make you aware that over a million southern residents are being held hostage by Hamas and their band of terrorists, firing missiles indiscriminately at southern communities. They want us to be so terrified to live in the South, that we abandon our land and run away. Their goal is to inch down from Gaza [Gush Katif] to the south, to the center, to Jerusalem, to Tel Aviv and eventually take over all of Israel.

This is a Grad Missile that landed in Sedot Negev 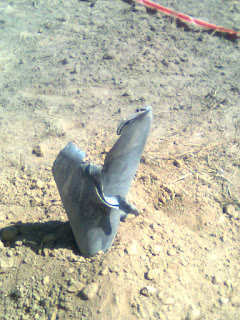 This is the large crater it made. 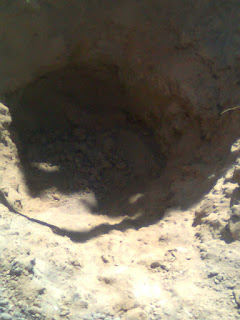 I think it's very important for us to remember that there are good Israeli Jews, a million according to most counts, under the threat of attack all the time.  And one of the tools/techniques of terrorism is the element of surprise to create insecurity.  You can have a few days of quiet and think that the optimistic "diplomatic agreements and media proclamations" are really for real, and then BOOM!  Another kassam, launched by Arab terrorists rips through the sky and destroys a home, school, garden, field, life and/or family...

We must feel their pain and fears, as if we're there with them.

I am angry.
You see, as most people in the United Kingdom and elsewhere around the world were going about their daily routines on Wednesday, here in Israel, over 1 million people were running for cover from a hail of rockets being rained down by Palestinian terrorists in Gaza. In the space of the preceding 24 hours, at least 80 rockets were fired on southern Israel. That’s more than three rockets per hour.
Just to put things in context: one million Israelis is roughly 13 percent of the population. Thirteen percent of the population of the UK equates to about 8 million people, or the entire population of London.  (complete article)

There's a campaign now to wear RED as identification with  the people in southern Israel on Thursday, November 8, 2012, because their alarm is called RED.  It's a call to Stop the Abandonment of Southern Israelis!
Wear RED!

*Sometimes I seriously wonder if it will really make a difference...
Posted by Batya at November 06, 2012

Batya, you do a marvelous job bringing awareness of the terror to so many people who are clueless.

Thank-you! May you continue to be blessed with the talent to write, write, write... What a mitzvah you are doing...

Now if can I just prove that I am not a robot...

Miriam, thank you!
Keep on telling us what is really happening.