Is The New York Infrastructure Too Old?

Reports about family members' homes in the New York area aren't good.  Some hadn't had their electricity returned from Hurricane Sandy when the snowstorm hit.  And others had barely gotten their homes reheated when they were again plunged into cold darkness. 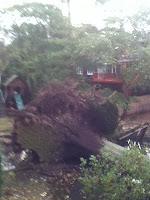 My friend Sharon Katz blogged about her elderly mother's gypsy existence on Long Island.  Just when she had thought she could finally stay in her newly warmed home, the snowstorm caused a tree to collapse and down the wires, so she had to leave again.


In the morning she returned home to get some belongings and saw a truck with a Minnesota license plate in front of her driveway. She went looking for the owner of the vehicle.
In her backyard was an entire crew of electric company men working on the tree and the downed wires.
My Mother thanked the men and asked them where they were from. They replied, "Minnesota," "Wisconsin", and other states. "What are you doing here?"
When these electric company workers (from whatever states) heard about the disaster, they drove for two days from their homes in order to come help. And there they were a united-states of electricians rewiring the electricity of the neighborhood for the benefit of my mother and tens of thousands of other folks that they didn't even know. They left their homes so that other could re-enter their homes once again.

When I was growing up in New York in the 1950's-1960's, we didn't have such storms or if we did, the electrical infrastructure withstood them.  That was the trauma of that 1965 Northeast Blackout.  Nobody expected, envisioned a blackout.

There was such a faith in the "systems" such as electricity, telephones and water.  It was the modern religion.  People trusted and depended on them more than on G-d.

In today's world the electrical needs are much more than the system can safely handle.  That must be stretching and damaging everything.

Does the United States of America have the  funds to rebuild or are they just going to keep on patching things up?
Posted by Batya at November 10, 2012

I think this situation is a symptom of the general decline of a debt-ridden system based on people who have no money voting themselves public money which isn't there. The infrastructure will continue to deteriorate and the standard of living in the US will decline. There will be more elderly and fewer to take care of them, fewer children born to grow up into the labor force. Israel is in much better shape. Jews, come home before it gets worse.

Maybe the US will pass a constitutional amendment to abolish the Electrical College.

>> Jews, come home before it gets worse


Those linemen from Minnesota are honorable and hard-working (not an American Jew amongst them, is probably why) but what they were NOT, is charitable. They receive exceptionally good overtime pay for responding to storm emergencies. Rest assured the New York linemen also were cheerful about flying to New Orleans after Katrina, in order to make that kind of money.

You could easily make that kind of money, GoyRebbe. Just learn how to weld and go work on the Israeli natural-gas rigs. But you'd rather sit on your butt while Noble has to bring in Filipinos & Ukranians, then whine about the foreigners wanting to worship their Jesus while they're in Israel.

goyish, true
re:Electoral College, I don't see its value, but some people I generally agree with seem to be in favor of its remaining.

Alan, what's the point of the nastiness?

>> what's the point of the nastiness?


to correct published statements which amount to declaring that the Emperor is wearing beautiful new clothes.

As a well-educated New York girl, you surely remember that the jury in the Peter Zenger trial disobeyed the Judge's instructions, and decided:

Writing the truth about what the Governor did, is a valid defense to a charge of libeling him".