Halachic guidelines on gentile support and challenges to Rabbi Riskin 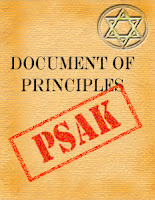 A document of principles regarding the acceptance of monetary and manpower assistance from Christian organizations or individuals has been formulated by the Committee of Binyamin Region Rabbis. The halachic document which can be read here in Hebrew should be reviewed by any Jew in Israel who is involved in any way with Christian sources. It is very thorough, clear, and addresses many of the concerns which JewishIsrael has brought to the attention of the public over the years. The document enjoys the endorsement of an impressive list of prominent rabbinic leaders in Israel…more

JewishIsrael feels Rabbi Riskin's feature article in Makor Rishon inverted the inherent intent of Rabbi Joseph Dov Ber Soloveitchik’s (the Rav) major essay on the subject, "Confrontation", and JewishIsrael has responded with a comprehensive report.
In the report, JewishIsrael takes a very in-depth look at Rabbi Riskin's article and his reinterpretation of the Rav’s directives. Our report explores the activities and aspirations of some of the major personalities and "friends" mentioned in Rabbi Riskin's article, who almost without exception are not only partnering with and supporting the Christian messianic movement and missionaries in Israel, but are actively engaged in advancing a theological unification of the Judaic and the Christian, something the Rav was adamantly against...more 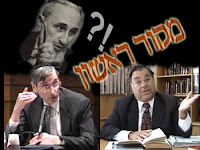 In May 2012 the Israeli newspaper Makor Rishon ran a lengthy feature article by Rabbi Shlomo Riskin. The subject matter was whether or not Jewish-Christian theological dialogue is permissible. In that article Rabbi Riskin appeared to have inverted the long-standing position of Rav Joseph B. Soloveitchik, z"l.
In a lengthy rebuttal of Rabbi Riskin's position, Rabbi Dr. David Berger, a recognized scholar on Jewish-Christian relations who serves on the Rabbinical Council of America's (RCA) Interfaith committee, has upheld Rav Soloveitchik's stance as it has long been understood...more 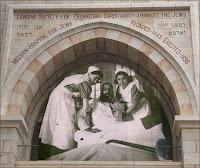 Hadassah, the Women's Zionist Organization of America, is celebrating their centennial anniversary. Hadassah and other Jewish medical foundations were founded, in part, as a proactive response to Christian missionary hospitals which were fiercely dedicated to converting Jews in pre-state Israel. Jewish Israel feels it is especially timely to review some hospital history because today's modern state of Israel is embracing evangelizing entities and becoming progressively more dependent on donations from those sources. The reaction to missionary activity among today's Jewish leadership stands in startling contrast to the historic norm. …more

Ellen, thanks so much for posting this important information.

Thanks, Batya
It's interesting how respected rabbinic figures are finally taking this issue quite seriously and establishing needed guidelines.

B"H, but the credit goes to people like you have have reminded them to wake up and take a stand.